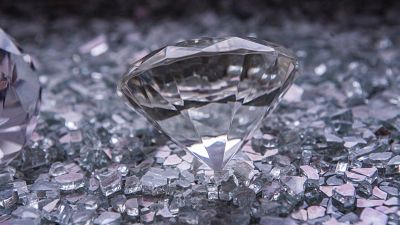 Diamond rain may be more common in the universe than previously thought   -   Copyright  Unsplash
By Luke Hurst  •  Updated: 07/09/2022

Diamonds are one of the most sought after commodities on Earth, due to their beauty, utility in industrial processes, and of course their scarcity.

Taking millions - even billions - of years to form deep within the Earth, we only have diamonds on the planet’s surface because of volcanic eruptions.

A new scientific study has found that while diamonds are in short supply on our home planet, they may however be plentiful elsewhere in the universe.

Earlier hypotheses and experiments have raised the possibility of ice giant planets literally raining diamonds, in a special type of precipitation brought about by incredible levels of pressure.

Now scientists from the US Department of Energy’s SLAC National Accelerator Laboratory have discovered that the presence of oxygen makes diamond formation more likely - meaning they could be forming in a wider range of conditions.

This means that diamond rain could be a phenomenon on even more planets than previously thought.

The diamond rain phenomenon is believed by some scientists to take place on Uranus and Neptune in our solar system.

It is thought it exists some 8,000 km below the surface of our ice giant neighbours, created from commonly found mixtures of hydrogen and carbon, squeezed together at incredible pressure.

And an experiment, conducted in 2017, simulated the environment found inside our two neighbourhood ice giants.

The scientists, again at the US Department of Energy’s SLAC National Accelerator Laboratory, were able to create and observe diamond rain for the first time.

Researchers simulated the environment found inside the planets by creating shock waves in plastic with an intense optical laser.

They were able to see that nearly every carbon atom of the original plastic was incorporated into small diamond structures up to a few nanometers wide.

While the diamonds created in the experiment are miniscule, the real diamond rain drops on Uranus and Neptune are predicted to be much larger - as much as millions of carats large.

The new study involved a new material that more closely resembles the chemical makeup of Neptune and Uranus, according to the researchers.

While those two planets contain carbon and hydrogen, they also have other elements, such as large amounts of oxygen.

They found the presence of oxygen makes diamond formation more likely - which has implications for how prevalent the phenomenon could be across the universe.

“The earlier paper was the first time that we directly saw diamond formation from any mixtures,” said Siegfried Glenzer, director of the High Energy Density Division at SLAC.

“Since then, there have been quite a lot of experiments with different pure materials. But inside planets, it’s much more complicated; there are a lot more chemicals in the mix. And so, what we wanted to figure out here was what sort of effect these additional chemicals have”.

Like the previous experiment, the researchers fired lasers at a certain type of plastic to see how it affected the atoms.

This plastic was however a PET plastic, which “has a good balance between carbon, hydrogen and oxygen to simulate the activity in ice planets,” according to Dominik Kraus, a physicist at HZDR and professor at the University of Rostock.

The team, led by the Helmholtz-Zentrum Dresden-Rossendorf (HZDR) and the University of Rostock in Germany, as well as France’s École Polytechnique in collaboration with SLAC, published the results in Science Advances.

The authors say the new findings could also lead to a new way of making nanodiamonds, which can be put to a number of practical uses here on Earth.

Where did the 'alien obelisk' found in Australia come from?