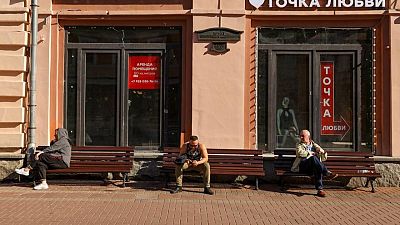 -Russia’s economy will post a shallower economic contraction than expected over the coming years and could return to growth on a quarterly basis from as early as the end of 2022, a top government official said on Tuesday.

Economy Minister Maxim Reshetnikov said the government was now forecasting a 2.9% contraction in Russia’s GDP for 2022, Russian news agencies reported – an improvement on its August prediction of a 4.2% annual decline.

The Russian economy is set to return to growth on a quarterly basis in late 2022 or 2023, Reshetnikov said. But across the full year of 2023 the economy would still post a slight contraction of 0.9% due to the “high base effect” of Russia’s strong growth of 3.5% in the first quarter of this year.

The new forecasts mark a significant improvement from the predictions made just last month when the economy ministry forecast a 2.7% fall in gross domestic product in 2023.

Russian officials have heralded the economy’s performance in recent months, saying it is holding up much better than expected in the face of Western sanctions imposed over Moscow’s invasion of Ukraine.

Some analysts question Russian officials’ newly optimistic assessment of the economy in the medium-term, pointing to the slow-burn effects of sanctions and mounting costs from measures such as the European Union’s energy embargo and restrictions on Western technology exports to Russia.

The economy ministry on Tuesday also downgraded its forecast for 2024, Reshetnikov said as it predicted shallower declines in 2022 and 2023 followed by a smoother recovery. It now expects 2.6% growth in 2024 instead of 3.7%.

Reshetnikov said overall Russia’s economic growth would be stronger over the coming years than first feared. He said the economy was on a trajectory to post GDP growth in excess of 3% a year after 2024 and stabilise at the country’s long-term growth rate of around 3% a year by 2026.

In April, after Moscow sent tens of thousands of troops into Ukraine in what Moscow calls a “special military operation,” the ministry warned the economy could slump by more than 12% this year.