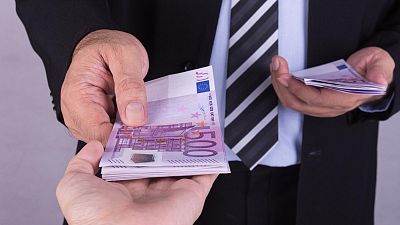 Using loans to invest in crypto has worked for some people but others advise against the risks involved.   -   Copyright  Canva
By Jack Ramage  •  Updated: 29/08/2022

Is taking out a loan to buy crypto wise? Almost a quarter of US investors seem to think so.

A recent survey by DebtHammer, which polled 1,500 investors across the US, found that 21 per cent of investors said they’ve used a loan to pay for their crypto investments.

These loans were often at exorbitant rates, with personal loans among the most popular choice. Of all the individuals who said they’d taken out a loan for cryptocurrency, 15 per cent said they used a personal loan.

According to the report, other methods of funding crypto investments came from payday loans, mortgage refinances, home equality loans, title loans and funds left over from student loans.

But why are so many turning to loans to fund investments in cryptocurrency in the first place and is it a sensible way to shore up your finances? Some have had success in doing so; others are not convinced it is the right decision.

Taking out loans to pay for crypto

A recent graduate from Leeds, England, who wished to remain anonymous, told Euronews Next that they used a payday loan to buy £600 (€712) worth of Bitcoin earlier this year.

"At the time I thought it was a good decision," they said. "But the price continued to fall – I lost a significant amount of my investment".

Data from DebtHammer shows that this isn’t an isolated issue.

Almost 19 per cent of respondents said they had struggled to pay back at least one bill due to their crypto investment, while 15 per cent noted that they were worried about eviction, foreclosure, or car repossession.

Others, however, argue that if loans are used sensibly, investing in crypto can be a viable option.

At the time I thought it was a good decision. But the price continued to fall – I lost a significant amount of my investment.

"The loan term is six years; I’m sure I’ll have pulled enough profit to at least cover the interest by then… maybe more," he told Euronews Next.

He notes that he deliberately took out a larger loan to ensure lower interest rates.

"I could have put the money [left over from the vet's bill] back into the loan straight away, but at the time it made more sense to put it into something that has done well before and see what happens," Griffiths added.

That said, he stresses that he made the decision with enough money to spare in case the market crashes.

"I wouldn't do something that foolish," he said. "Paying back the loan is not a concern regardless for me – luckily I have a reasonably good income".

Since he made the investment 12 months ago, Griffiths notes his profits are currently down “but inconsequential”.

“I’ve not lost anything in the grand scheme of things,” he continued. “There were points in time where I could have walked away with a profit”.

When asked whether he would encourage others to do the same, Griffiths notes that it really "depends if they’ve got a plan. I personally wouldn't borrow to just invest – you would resent the repayments if you lost the money".

Cryptocurrency offers a solution for those with low credit score

An individual who wished to remain anonymous told Euronews Next that he has used the cryptocurrency platform Binance to borrow money as a way of negating traditional bank regulations in order to buy a car.

"I have savings of around $5,000 [€5,017], however, due to a number of reasons, I had to go on a debt repayment plan. This meant my credit score was literally zero and no one would lend me money," he told Euronews Next.

I think the major risk of cryptocurrency is that, if people are normally financially illiterate, which they are, they are ten times less informed about what cryptocurrencies are... and therefore, what the future prospects are.

"Even with saving, a traditional bank won’t allow me to borrow against it and it has no way of increasing in value as interest rates are so low".

Using Binance, he was able to borrow 70 per cent of the loan-to-value (LTV) and then stake the money to help pay the interest.

"Where else would I be able to take out a loan that helps to repay its own interest and use my current savings as collateral?

"I did this at the time the market was really low so as prices go up, I also benefit as my investment increases".

There are of course risks to this strategy, he notes the market is highly volatile – as seen in the latest crypto crash.

However, "the worst case scenario is that his holdings get liquidated. It’s no worse than having to use my savings to buy a car anyway," he said.

Although there are some circumstances where borrowing money to invest in the crypto market may be viable, data shows that often it leads people into financial hardship.

So, why do people make the decision? According to Dr Konstantinos Stylianou, Professor of Competition Law and Regulation at the University of Leeds with a focus on digital markets, it's because "the vast majority of people are financially illiterate".

"I don't think it’s a good idea [to invest in crypto with a loan]. I think people should be a lot more careful in terms of how they invest; taking on debt is risky," Stylianou told Euronews Next.

"This is precisely why we want to regulate crypto," he continued.

Stylianou argues that regulating crypto would protect customers by giving them more of an understanding of what they’re investing in – particularly if it involves taking on debt to fund the investment.

He compares the lack of education and regulation on investing in the cryptocurrency market to mortgages and other loans – where people are required to sit through an in-depth video or read numerous papers regarding what individuals are signing up for.

With the crypto market becoming more and more accessible, the lack of education in crypto markets and financial literacy, in general, can lead some to invest in poor decisions.

"It’s part of a regulator's role to protect customers – at the very least what regulators want to make sure is that customers get is more information," Stylianou added.

"I appreciate that a part of the appeal of crypto is the insane returns – as well as the librarian and non-traditional financial system, not managed or controlled by big banks," he noted.

"I can see how people are drawn to this form of investment. People are free to choose what kind of investment profiling they want for themselves: they can be as risky as they want.

"But I think the major risk of cryptocurrency is that, if people are normally financially illiterate, which they are, they are ten times less informed about what cryptocurrencies are, how they work, and how they're valued – and therefore, what the future prospects are," Stylianou concluded.

"I really don't think that it's a good idea to invest more than people can afford to lose, including taking on debt".

These workers tried 'quiet quitting' and have never looked back