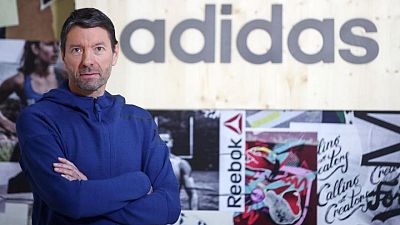 <div> <p><span class="caps">BERLIN</span> -German sporting goods maker Adidas unexpectedly said on Monday that its Chief Executive Kasper Rorsted would leave his post next year, before his contract is due to run out, and that it had started searching for a successor.</p> <p>“After three challenging years that were marked by the economic consequences of the <span class="caps">COVID</span>-19-pandemic and geo-political tensions, it is now the right time to initiate a <span class="caps">CEO</span> transition and pave the way for a restart,” supervisory board Chairman Thomas Rabe said in a statement.</p> <p>The group said Rorsted and its supervisory board had mutually agreed that the <span class="caps">CEO</span> would hand over his position during the course of 2023. He will remain in office until a successor has been appointed, it added.</p> <p>Rorsted, who has been at the helm of Adidas since 2016, said that it had required “huge efforts” to master the challenges of the past few years.</p> <p>“This is why enabling a restart in 2023 is the right thing to do – both for the company and me personally,” he said, but did not elaborate on the reasons why he was leaving. Adidas had in 2020 extended his contract until July 31, 2026. </p> <p>Shares in Adidas extended losses on the news, trading 3.2% lower by 1150 <span class="caps">GMT</span>, underperforming the blue-chip <span class="caps">DAX</span> index, which was 2% lower.</p> <p>Adidas last month cut its 2022 earnings target, citing a slower-than-expected recovery in China from pandemic restrictions.</p> </div>