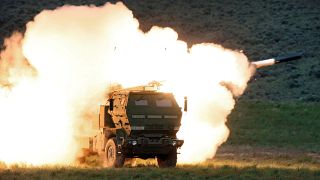 While the war in Ukraine continues to rage, the United States announced on Monday a new $1 billion (€977 million) package of military aid and weapons, the largest arms shipment to date to the embattled country.

Among the package will be 1,000 Javelin anti-tank missiles, mortars, artillery ammunition, and of course, the US' High Mobility Artillery Rocket Systems (HIMARS).

These truck-mounted high-tech rocket systems in particular have been attracting attention on social media in recent months, where many videos show them purportedly destroying Russian ammunition depots and other targets.

In June, the US doubled the number already on the battlefield in Ukraine with more now on their way as part of the latest weapons package.

The systems are mounted on trucks, which carry a container with six precision-guided rockets that can travel about 70 kilometres. The HIMARS enable Ukraine to strike Russian forces and weapons from further away, making it less risky for Ukrainian troops.

Ukraine has been heavily reliant on weapons and equipment sent from its allies in its defence against Russia’s military forces.

But allies such as the US have been careful to try to strike a balance between providing the country with the equipment it needs while avoiding escalating the conflict outside of Ukraine’s borders.

Manufacturer Lockheed Martin describes the M142 HIMARS as having "shoot and scoot" capability, referring to the fact it is a highly mobile weapons system that can fire and retreat at speed, reducing the chance of being targeted by the enemy.

It is a truck-mounted multiple launch rocket system with a container with six rockets.

The HIMARS can move into position, fire, retreat, and reload in a matter of minutes.

Mark Hertling, a former Commanding General of the United States Army in Europe, gave the lowdown on the HIMARS on a Twitter thread in May, stating it is fast-moving, provides a "quicker strike" but a "smaller punch," and is "easier to resupply and maintain" than previous multiple missile systems.

One US official noted that these particular advanced rocket systems will give Ukrainian forces greater precision in targeting Russian assets inside Ukraine.

The expectation is that Ukraine could use the rockets in the eastern Donbas region, where they could both intercept Russian artillery and take out Russian positions in towns where fighting is intense.

Ukraine needs multiple launch rocket systems, according to Philip Breedlove, a retired US Air Force general who was NATO’s top commander from 2013 to 2016.

"We need to get serious about supplying this army so that it can do what the world is asking it to do: fight a world superpower alone on the battlefield," he said.

US forces have used the HIMARS in multiple conflicts since 2010, including in Afghanistan, Iraq, and Syria.

The last package from the US, announced July 1, provided Ukraine with $820 million (€797 million) in new military aid, including new surface-to-air missile systems and counter-artillery radars to respond to Russia's heavy reliance on long-range strikes in the war.