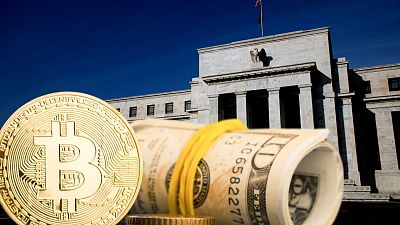 The cryptocurrency market is keenly awaiting a big decision by the Fed this week   -   Copyright  Canva
By Pascale Davies  •  Updated: 25/07/2022

Bitcoin started Monday in despair and faces a tense week ahead as the US central bank appears set to make a massive policy decision on interest rates that will affect the already weakened cryptocurrency.

The second-largest crypto Ether and smaller alt-coins like Solana also saw similar declines of just over 4 per cent.

It follows Ether’s gains last week of nearly 50 per cent after it announced the development of an upgrade called “Merge,” which will move the crypto to a more energy-efficient and more environmentally-friendly system in September.

Despite cryptocurrencies originally being endorsed as an alternative to the traditional financial system, they are largely affected by traditional finance since institutional capital poured money into digital assets.

The US Federal Reserve will meet on Tuesday and Wednesday with economists expecting another rate hike as global inflation and economic woes swell.

Recent Fed rake hikes have been the most aggressive in decades and this month’s meeting comes as investors try and figure out if the Fed’s decision has yet or will trigger a recession, which could have a catastrophic impact across global markets, crypto included.

However, it is tipped to be a less aggressive hike at either 75 or 100 basis points.

But cryptocurrencies had already been struggling since the start of 2021, with Bitcoin down roughly 50 per cent in value since then.

And in the past couple of months, cryptos have borne the brunt of a massive ripple effect after the so-called stablecoin Terra and its sister coin Luna became virtually worthless overnight. Not only did crypto prices plunge but three crypto companies also went bankrupt.

What will also be telling this week is the US’s second-quarter gross domestic product figures which are expected on Thursday.

The first quarter GDP figures declined by 1.6 per cent. If there are two contracting results in a row it is viewed as a sign of recession.