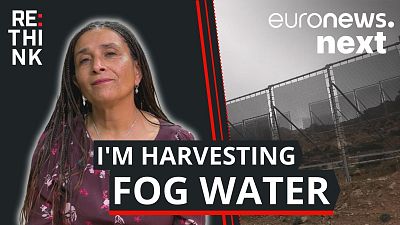 For Jamila Bargach, fog is not just a haze that you see in the early morning.

“We have given fog another dimension than just something that delays an aeroplane. It is also and equally something that can be used to save communities from not accessing water,” she says.

She co-founded Dar Si Hmad, a foundation that focuses on sustainability, in 2010 along with Dr Aissa Derhem. The organisation focuses on the southwestern region of Morocco where they installed their flagship project - the fog collection initiative.

The area has suffered from many droughts that have deeply impacted local communities. The lack of installations to provide drinking water to homes is adding to the problem.

To address the situation, Bargach’s foundation installed a fog-catching system that collects water from the fog and distributes it.

The technique behind collecting the water from fog is simple.

“If you think about a volleyball net that in the morning you find wet because of the humidity collected, it's the same principle,” Bargach explained.

The main difference is that the net is engineered to get as much water as possible from the fog and that the water that drips down is directed into a trough and then onto containers to be later distributed to local communities.

The installation is currently helping 16 villages in the Aït Baamrane region where it is placed but Bargach and the foundation don’t want to stop there.

“We are in the process of expanding the projects and hopefully we will connect at least eight more villages, if not 12, depending on the funding that we have,” she said.

Meet the men redesigning the battery to make it more sustainable