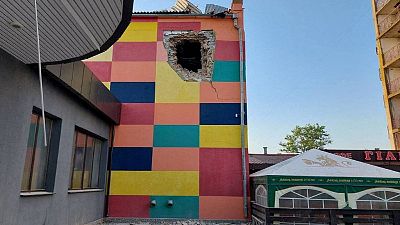 A building destroyed by shelling is seen in Ochakiv, Ukraine, in this handout picture obtained by Reuters on June 28, 2022.   -   Copyright  State Emergency Service of Ukraine in Mykolaiv region/via Reuters/Files
By Reuters and The Cube  •  Updated: 21/07/2022

Russia's communications watchdog said on Wednesday it was taking steps to punish the Wikimedia Foundation, which hosts online encyclopedia Wikipedia, for violating Russian law around the conflict in Ukraine.

In a statement, Roskomnadzor said that Wikipedia still hosted "prohibited materials, including fakes about the course of the special military operation on the territory of Ukraine," and that search engines would be used to inform users that Wikimedia violated Russian law.

Writing on Telegram, vice chair of the Russian parliament's committee on information policy Anton Gorelkin said that links to Wikipedia would be accompanied by a disclaimer warning users about legal violations by Wikimedia Foundation.

Wikipedia, which says it offers "the second draft of history," is written and edited by volunteers across more than 300 languages.

With the shuttering of much of Russia's independent media after the invasion of Ukraine, Wikipedia became one of the last available sources of fact-checked information on the war available to Russians.

Russia introduced sweeping new laws on sharing information about the conflict in Ukraine shortly after the Kremlin ordered tens of thousands of troops to deploy to the country on February 24.

Narratives around the conflict - Europe's largest since 1945 - are highly contested.

Russia does not call what is happening a "war" or an "invasion," criminalising the use of either word and instead framing it as a "special military operation" to "demilitarise and denazify" Ukraine.

Ukraine and the West say that Russia's framing is a figleaf aimed at justifying an imperial-style war of aggression.

Ukraine war: The latest developments you need to know