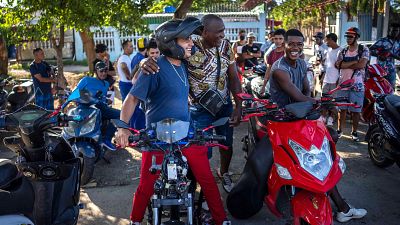 Faced with the ongoing fuel shortages that have plagued Cuba, young people in the country have increasingly turned to electric motorbikes, dubbed “motorinas”, as a solution to get around.

In the Caribbean nation’s capital of Havana, dozens of young people gather to do stunts, engage in races, and exchange information about ways to increase the speed of their vehicles.

The “motorinas” are generally two-wheeled, low-speed motorbikes, but these young people, who link up with each other via social networks have found ways to make them move faster – a process that can involve making dangerous modifications to the batteries.

"Here we spend the afternoon, we race for a while, we entertain ourselves and we test the differences of the motorcycles," said Alejandro Vasallo, a 23-year-old owner of "Bandolero," a Nippon-brand motorcycle that he feels particularly proud of.

"Just fun, it’s fun to see which shop is better and which one builds the best bikes and then we race to the finish line," he said.

For these youngsters, the island's chronic fuel shortages and the need to queue for hours to fill up a tank have made the electric motorcycles a lifeline.

The government authorised the importation of these electric vehicles in the past decade in an attempt to circumvent fuel shortages and ease the burden on the country’s deficient public transportation system.

Since then, according to the national traffic authorities, some 300,000 electric motorcycles have been circulating throughout the country, a third of which are in the capital.

They can cost between 2,000 and $5,000 (€4,900) and this year, in addition to those that are imported - usually from China - authorities announced that they will be producing their own electric motorcycles and bicycles.

Whether due to fashion or necessity, electric motorcycles are changing the urban landscape in Cuba and generating some challenges: The batteries sometimes catch fire and the inexperience of the drivers is causing traffic accidents.

The latest figures available from the fire department showed that in the first half of 2020, there were 263 fires from motorcycles with gel or lithium batteries, a notable increase compared to 208 for the entire year in 2019.