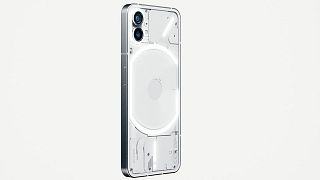 The Nothing Phone (1) is said to be more environmentally friendly than competitors.   -   Copyright  Image via Nothing
By Jack Ramage  with Reuters  •  Updated: 13/07/2022

Until recently, London-based start-up Nothing had remained somewhat under the radar.

That changed when the company, which was founded in 2020, announced its newest Nothing Phone (1), which quickly gained attention from tech enthusiasts and officially launched on Tuesday.

Nothing says its smartphone offers 18 hours of use with every charge, and two days on standby, and that it can reach 50 per cent power in just 30 minutes of charging.

It says the phone also has an array of remote features including being able to unlock the doors of a Tesla car.

Here’s what you need to know about the newest handset, which has been billed as one of the most environmentally friendly to hit the market.

What makes the Nothing Phone (1) so different?

At first glance, the model seems to be similar in design and features to the iPhone 12 - with flattened edges, side button layouts and dual rear-facing cameras.

The phone features a transparent back and was inspired by artists like Massimo Vignelli who designed New York’s subway map and made a complex system look like art.

"We were inspired by our childhoods, the rush of engaging with our first-ever tech products - like the transparent Gameboy, or even old cassette tapes," Akis Evangelidis, Head of Marketing and Co-Founder of Nothing, told Euronews Next in an interview in June.

He added that modern tech design has “become cold and doesn't trigger the same sense of excitement as it used to”.

The design team is fronted by Adam Bates, a former designer for Dyson.

What really sets this product apart, however, is Nothing’s commitment to sustainability.

“We can’t deny the importance of sustainability at this stage, especially within the consumer tech industry,” Evangelidis continued. “We really don’t want to be another brand caught up in greenwashing”.

The phone is made up of a 100 per cent recycled aluminium frame which makes it light and robust, while over 50 per cent of the phone’s plastic components are made with bio-based or post-consumer recycled materials -  an industry-leading percentage.

We really don’t want to be another brand caught up in greenwashing.

Akis Evangelidis
Head of Marketing and Co-Founder of Nothing

Packaging for the phone will also be made from bio-friendly soybean ink, recycled fibre (bamboo, trees and sugarcane) and entirely without plastic components.

"We want to support our customers, and tech users alike, in making an informed decision while we keep on finding new ways to improve on tech sustainability,” Evangelidis told Euronews Next.

"For years now, it felt like all the artists had left the industry. All we’re left with are cold, unexciting and derivative products. It was time for a fresh take,” Carl Pei, CEO and Co-founder of Nothing, said in a statement.

"Phone (1) was designed out of instinct, making a product for ourselves and more importantly that we would be proud to share with our loved ones. Can’t wait for people to start experiencing it".

The Nothing phone will run off a custom version of Android, backed by a Qualcomm Snapdragon chipset.

Pei co-founded smartphone maker OnePlus in 2013 and made it a rival to Apple and Samsung by offering premium features at half the price, and becoming the top seller in several countries including India.

After leaving OnePlus in 2020, he founded Nothing last year with backing from the likes of Tony Fadell, designer of Apple’s iPod, Twitch co-founder Kevin Lin and Reddit CEO Steve Huffman.

The Nothing Phone (1) is only the company's second product launch, following last year's Ear (1) wireless earbuds which were priced at $99 (€98.7), leagues below their counterparts in price while retaining premium features like active noise cancellation.

How much does the Nothing Phone (1) cost?

The Nothing Phone (1) is priced from £399 (€473), with the company saying it is cheaper than premium phones with similar features and that there are over 200,000 pre-orders for it.

OnePlus used an invite-only strategy for selling smartphones that created high demand by keeping customers in a constant state of anticipation.

Following a similar strategy, Nothing held an auction in June for an initial 100 of the new phones, fetching bids of over $3,000, it said.

The company teamed up with StockX to auction the first serialised units, with all proceeds going towards a community-managed fund.

What’s it like inside Fisker’s Ocean electric vehicle? We take a look