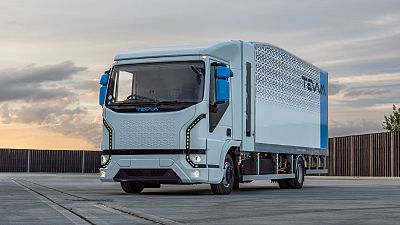 Tevva has launched a 7.5-tonne battery-electric truck whose normal range can be doubled or tripled to around 500 km using hydrogen as a backup energy source.   -   Copyright  Courtesy of Tevva
By Natalie Huet  •  Updated: 05/07/2022

Soaring fuel prices and greener policies have given electric vehicles (EVs) a serious boost in recent years. Now the attention is turning to trucks, but manufacturers still face a dilemma over which technology can best do the job.

Some companies like Volkswagen are embracing battery-electric trucks because they’re cheaper and the charging infrastructure is more developed.

Others such as Hyundai Motor, Daimler Truck and Volvo Trucks are betting on hydrogen-powered fuel cells because they can support longer ranges, heavier payloads and longer uptime via faster refuelling.

For British start-up Tevva, the solution could be somewhere in the middle.

It has just launched a new 7.5-tonne battery-electric truck whose normal range can be doubled or tripled to around 500 km using hydrogen as a backup energy source.

That means truck drivers don’t need to stop to charge and can spend a full day driving.

“Most of the time, we're using the batteries and the grid. But we're removing any concern about the range by the hydrogen system,” Tevva CEO Asher Bennett told Euronews Next.

“So we really want you mostly to use grid electricity which is abundant and cheap, but when you need to, the hydrogen is always there,” he said.

We really want you mostly to use grid electricity which is abundant and cheap, but when you need to, the hydrogen is always there

Having a reserve of hydrogen as a backup also removes the risk of the trucks ending up stranded because their battery ran out faster than expected.

“Our goal is a truck that just gets the job done. Repatriating a truck in the middle of the workday is not fun,” Bennett said.

Tevva is launching the truck as a 7.5-tonne, to be followed by 12-tonne and 19-tonne models.

The company is aiming to capture the medium-duty truck market, where vehicles are typically going back to the same depot every evening, and where they could plug into standard medium power chargers to top up more cheaply than on the go.

For the hydrogen reserves, Tevva says the goal would be to top up once or twice a week. It says mobile refuelling stations could go to the depots of trucking companies every week to make up for the current dearth of refuelling points across Europe.

Is hydrogen the future of trucks?

Hydrogen-powered trucks do have an appeal. Instead of being charged from an external source, they produce their own electricity on board – when the hydrogen stored in the vehicle comes into contact with an electrochemical cell. The only byproduct emitted is water vapour.

Asian manufacturers are currently leading the market for hydrogen vehicles.

South Korean conglomerate Hyundai’s Xcient trucks have a range of around 400 km and they’re being trialled in a pilot in Switzerland – where road tax is waived for zero-carbon vehicles – to undertake deliveries for supermarkets and logistics companies.

Volvo Trucks, which already makes battery-electric trucks, is the latest manufacturer to test vehicles using fuel cells powered by hydrogen, and it aims to bring them to market in “the latter part of this decade” although it won’t give a more specific date.

Last week, it unveiled new hydrogen trucks with a range comparable to many diesel trucks – up to 1,000 km – and a refuelling time of under 15 minutes. The total weight can be around 65 tonnes or more.

“For us, this is one additional piece of the puzzle to be able to really have a good menu of different options for our customers so they can make this transition,” Jessica Sandström, head of product management and sustainability at Volvo Trucks, told Euronews Next.

By 2030, the company is aiming for half of its European sales to be from electric trucks, powered by either batteries or hydrogen fuel cells – but the exact share of each technology remains very much an open question, she said.

That’s because big challenges remain in the rollout of hydrogen vehicles.

“It’s still early days,” Sandström said, citing the need to scale up hydrogen refuelling infrastructure and to seriously boost supplies of green hydrogen – produced without fossil fuels and instead with renewable sources, such as wind, water and solar power.

And while many complain that Europe’s EV charging station network is patchy, it is significantly more developed compared to existing hydrogen refuelling points.

As of the end of last year, there were just 228 hydrogen stations across Europe, mainly in Germany, France, the UK, Switzerland and the Netherlands, according to data from H2stations.org.

“So it will take some time, but there’s a lot of interest in this area,” Sandström said.

“The important thing now is that we make sure that we communicate what we want, where we are heading and to send the message to everyone that there will be a lot of customers if you are building charging stations, but there will also be customers for the hydrogen refuelling stations”.

[Editor's note: This story has been corrected to reflect that the total weight of the new hydrogen truck developed by Volvo Trucks can be 65 tonnes or more, not the total load carried.]