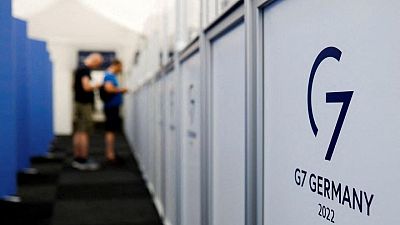 BERLIN – The leaders gathering for a G7 summit in southern Germany this weekend would normally have every reason to expect sumptuous Bavarian specialities like Schweinshaxe, a succulent pork knuckle dripping with fat, and a host of other meaty dishes.

But not this time. Sustainability is the watchword this year not just for this summit, but for all international meetings Germany is hosting. And what’s good for the environment is less so for fans of Germany’s traditionally meat-led cuisine.

“There’s less meat on the menu at all the G7 meetings,” sighed one minister earlier this year. “The Foreign Ministry insists.”

The ecologist Greens are the second largest party in Chancellor Olaf Scholz’s three-way coalition, and all the party’s ministers are keen to put an ecological stamp on their policies.

In the case of Greens Foreign Minister Annalena Baerbock’s portfolio, that extends to international summits.

Many agronomists argue that eating meat is a luxury that humanity is ever less able to afford – total greenhouse gas emissions from rearing and eating beef can be as much as 200 times those resulting from nuts or root vegetables.

Berlin will not make the leaders’ menus publicly available until after they have eaten, but the tendency is clear from the catering already announced for the thousands of staff and journalists who will attend the Alpine gathering.

“The focus will be on seasonal and creative vegan and vegetarian foods,” the government said of the output expected from the event’s 50 cooks. “Meat and fish are deliberately considered only as ‘add-ons’.”

The leaders from Germany, the United States, Britain, Canada, France, Italy and Japan will doubtless have weightier matters on their mind than the cuisine.

With supplies of Russian gas dwindling against the background of Moscow’s invasion of Ukraine, economy minister Robert Habeck, a Green, has been forced to grant a stay of execution to Germany’s polluting coal power stations.