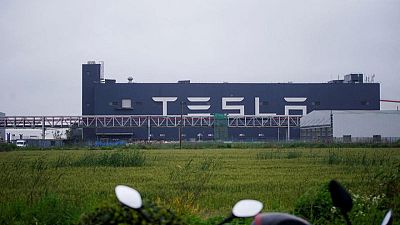 <div> <p><span class="caps">SHANGHAI</span> – Tesla Inc has restored weekly output at its Shanghai plant to nearly 70% of the level which it had operated at before the city’s <span class="caps">COVID</span>-19 lockdown, according to two people familiar with the matter.</p> <p>The U.S. automaker, which added a second shift of workers in the middle of last week, is expected to increase output further this week, said the people, who declined to be named as the matter is private.</p> <p>Tesla did not immediately respond to a request for comment.</p> <p>Bringing production back to pre-lockdown levels has been a challenge for Tesla at the Shanghai plant, known as Gigafactory 3, amid the ongoing lockdown of the Chinese economic hub which forced the factory to shut for 22 days. </p> <p>While the city government had given Tesla significant help to reopen, the company had battled numerous obstacles such as insufficient workers as well as logistics problems that impacted the supplies of parts, including wire harnesses.</p> <p>This forced it on many occasions to delay plans to reopen or increase output and even halt most of its production at the plant at one point.</p> <p>After reopening on April 19, the Tesla factory produced 10,757 vehicles by the end of April, selling 1,512 of them, data released by the China Passenger Car Association showed. </p> <p>That compared to 65,814 cars sold in March and marked the lowest sales tally since April 2020, four months after the factory started delivering China-made cars.</p> <p>Shanghai authorities will cancel many conditions for businesses to resume work from Wednesday, a city official said on Sunday, as it looks to start lifting city-wide lockdown that began some two months ago and will also introduce policies to support its battered economy.</p> <p>Its efforts to spur consumption included adding 40,000 car ownership quotas for the year and subsidising people who exchange their old combustion engine vehicles for battery-powered electric cars. </p> <p>The move came after Premier Li Keqiang held a key meeting last week during which he urged local authorities to take measures to spur economic growth in the second quarter and stem rising unemployment after the country’s stringent zero-<span class="caps">COVID</span> movement restrictions disrupted production and damped consumption in many parts of the country. </p> <p/> </div>