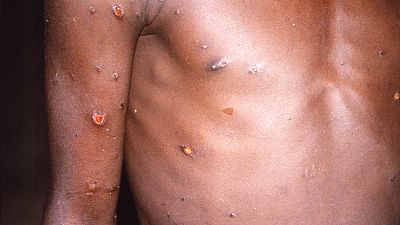 Scientists who have monitored numerous outbreaks in Africa say they are baffled by the recent spread of monkeypox in developed countries   -   Copyright  CDC via AP
By Euronews  with AP  •  Updated: 25/05/2022

A growing number of Western countries are facing an unusual outbreak of monkeypox, a virus related to smallpox that's typically limited to Africa.

Dozens of cases of monkeypox have so far been reported in the UK and in at least 12 countries across the European Union: Austria, Belgium, France, Germany, Italy, Portugal, Slovenia, Spain, Sweden, the Netherlands, Denmark and the Czech Republic.

Switzerland, Norway and Israel confirmed their first cases of monkeypox over the weekend. The United States, Canada, Australia and Argentina have also reported infections. On Wednesday, the United Arab Emirates became the first Arabian Peninsula state to announce a case.

Most cases in Europe have so far been found in men who have sex with men, "which suggests that transmission may take place during intimate relations," the European Centre for Disease Prevention and Control (ECDC) said in a statement on Monday.

“Most of the current cases have presented with mild disease symptoms, and for the broader population, the likelihood of spread is very low,” said Andrea Ammon, the agency's director.

“However, the likelihood of further spread of the virus through close contact, for example during sexual activities among persons with multiple sexual partners, is considered to be high.”

UK health authorities said on Wednesday that 14 more cases of monkeypox had been detected in England, and one confirmed in Scotland, taking the total number of confirmed cases since May 7 to 71.

Portugal revised its total upwards to 37, and Madrid health authorities said the capital had confirmed 30 cases.

Spanish health authorities are investigating possible links between a recent Gay Pride event in the Canary Islands, which drew some 80,000 people, and cases at a Madrid sauna.

European countries should focus on swiftly identifying and managing new cases, reporting them and tracing their contacts to stem the outbreak, the ECDC said.

Stella Kyriakides, European Commissioner for Health and Food Safety, added: “I am concerned about the increased number of reported monkeypox cases in the EU and globally. We are closely monitoring the situation, and whilst currently the likelihood of spread in the broader population is low, the situation is evolving".

"We all need to remain vigilant, ensure that contact tracing and adequate diagnostics capacity is in place, and ensure that we have the necessary vaccines, antivirals and personal protective equipment for health professionals available".

The ECDC says infected persons should remain isolated until scabs fall off and should especially avoid close contact with immunosuppressed people and pets.

"If human-to-animal transmission occurs, and the virus spreads in an animal population, there is a risk that the disease could become endemic in Europe," the agency said.

Abstaining from sexual activity and close physical contact is also advised until the rash heals. Close contacts of monkeypox cases should also self-monitor for the development of symptoms for 21 days after the last exposure.

The World Health Organization (WHO) said over the weekend it expects to identify more cases of monkeypox as it expands surveillance in countries where the disease is not typically found.

The agency’s Europe director warned that as summer begins across the continent, mass gatherings, festivals and parties could accelerate the spread of monkeypox.

Meet the doctor fighting fake news about monkeypox on TikTok