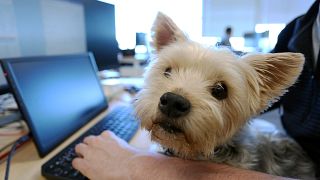 "The tolerance for pets (at work) during the pandemic has increased," Tungsten Collaborative president Bill Dicke said.   -   Copyright  Dave Chan / AFP
By Euronews  with AFP  •  Updated: 09/05/2022

Daisy greets visitors to the office with her tail wagging. Online, she is listed as "chief morale officer" of Ottawa-based design company Tungsten Collaborative, and is among the many pets joining their owners returning to Canadian offices after working from home during the pandemic.

The 12-year-old golden Labrador sniffs around the workplace for treats or something to play with. Next to her, a Basset Hound with long, floppy ears named Delilah begs for attention.

Tungsten Collaborative, which employs around 10 people in the Canadian capital, also plays host to Daisy's four-legged colleagues Eevee the Greyhound and German Shepherd puppy Hudson, who lets out a bark.

"We encourage people if they have pets to bring them (to work)," Tungsten president Bill Dicke told AFP.

"You develop this relationship being at home with your pet on a day-to-day basis and all of a sudden you go back to work, so now they have to be put in a crate for the day or roam the house alone, it's not fair to them," he said.

"The tolerance for pets (at work) during the pandemic has increased," he added.

People support dogs at the office

There's a row of water bowls in the office kitchen, if the dogs get thirsty. Throughout the day, they sleep under desks , chase balls down a hallway or chew squeaky toys.

Having the Ottawa company listed by the Humane Society as dog-friendly has helped boost business and increased staff productivity, Dicke said.

Workers are forced to take regular breaks for dog walks instead of eating lunch at their desk and are not fretting about their pet being left alone at home, he explained.

According to a recent Leger survey for PetSafe, just over half of Canadians are in favour of bringing dogs to the office.

The idea is especially popular among young people, with 18 percent of those aged 18 to 24 saying they would change jobs if their employer refused to allow them the option of bringing their pet to work.

With some 200,000 Canadians adopting a dog or cat since the start of the COVID-19 pandemic, bosses asking their employees to come back to the office may have to consider the option.

Johan Van Hulle, 29, joined Tungsten last year. The rule on dogs, he said, "was a key part of the decision" to take the job.

"Allowing dogs is a good indicator" of a company's culture, Eevee the Greyhound's owner said, adding that he was looking for a "not too corporate" workplace.

He loves going to work

His owner Trevor Watt didn't want to leave the Yorkshire Terrier alone after moving into a new house and returning to the office in January.

It was supposed to be a temporary arrangement. But not only has Samson adapted to office life, he endeared himself with colleagues and staff in neighbouring offices, who now take turns walking him.

"He loves going to work," said Watt, who enjoys it too: "I don't have to worry about him".

Petting him is a great way to "decompress after a tough meeting," said Watt's boss, Byron Williams.

Stains on the carpet

Dogs in the workplace, however, can also create challenges, especially for those who are afraid of dogs or allergic to them.

Samson stays on a leash when one of Watt's colleagues, who has a phobia of dogs, is around.

At other offices, workers surveyed by AFP complained of stains on the carpet, disruptive barking and the pet hair that seems to get everywhere.

3 years on, UK tech and innovation are stagnating in Brexit Britain