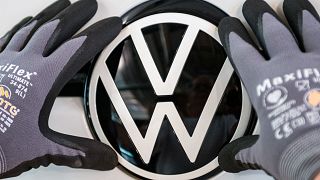 European consumers bought nearly twice as many electric vehicles in the first quarter of this year, compared to the same period of 2021   -   Copyright  JENS SCHLUETER / AFP
By Tom Bateman  & Reuters  •  Updated: 05/05/2022

German carmaker Volkswagen has "sold out" of battery-electric vehicles in the United States and Europe, meaning new customers will have to wait until 2023 to get one.

VW Group CEO Herbert Diess told the Financial Times that the company's brands - which include Volkswagen, Porsche, Škoda and Audi - had a backlog of 300,000 orders for EVs in western Europe alone.

"We have very high order books and… order intake on electric vehicles,” Diess told the FT.

"We are basically sold out on electric vehicles in Europe and in the United States. And in China, it’s really picking up," he added.

Volkswagen delivered 99,000 EVs worldwide in the first quarter of 2022, according to a report in the Financial Times.

Top rival Tesla, the world's biggest electric car maker, delivered over three times that number in the same period, at 310,048.

The revelation that VW has sold out of EVs comes as figures from the European Automobile Manufacturers Association (ACEA) showed that battery-electric vehicles almost doubled their market share in the region in the first quarter of 2022.

Battery EVs made up 10 per cent of total EU passenger car sales between January and March this year, while plug-in hybrid EVs accounted for 8.9 per cent.

Hybrid electric vehicles accounted for more than a quarter of the market, up from around a fifth in the same period last year. Cars powered by petrol and diesel lost market share but still accounted for 52.8 per cent of the EU market during the period.

Electric vans are 25% cheaper to run than diesel, study finds