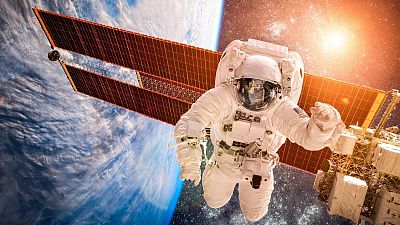 Canadian astronauts who commit crimes on the Moon could face punishment under a new law that extends the country's criminal jurisdiction into outer space.

The "Civil Lunar Gateway Agreement Implementation Act" is a piece of legislation added on to the country's 2022 federal budget, which passed its first reading in Canada's House of Commons - the lower house of parliament - at the end of April.

It covers the Moon itself, as well as the proposed Lunar Gateway space station, which NASA says will play "a vital role" in getting humans to Mars.

Canada joined the United States-led Lunar Gateway project in 2019, and plans to contribute an 8.5 metre–long robotic arm called Canadarm3 to the station.

The new act being scrutinised by parliamentarians essentially extends Canadian law to space, meaning that anything that would be illegal in Canada will become illegal on board spacecraft travelling to the Lunar Gateway, on the Gateway itself and on the surface of the Moon.

It also raises the possibility that until now, in legal terms, Canadian astronauts in orbit have been free to commit zero–gravity acts of theft or violence against their fellow spacefarers.

How does space law work?

Humanity's only current longer-term, off-world habitat, the International Space Station (ISS), found a way round the issue of deciding which laws apply in space.

In 1998, the parties involved in the ISS signed an agreement giving them criminal jurisdiction over their own citizens while on the station. Simply put: each country's earthbound laws apply on the ISS.

As humanity approaches a time when humans may realistically be living and working in space, an international centralised space governance system will be needed.

Nations also keep control over the elements of the station they contribute - for example, laboratories. In the case of the European Space Agency (ESA), the laws of the individual European countries taking part in the agency apply.

"This legal regime recognises the jurisdiction of the Partner States’s courts and allows the application of national laws in such areas as criminal matters, liability issues, and protection of intellectual property rights," an ESA guide to the legal framework behind the ISS says.

Other than the ISS agreement, the 1967 United Nations Outer Space Treaty, the basis of space law, sets out some general rules for space exploration.

It includes a commitment that the Moon - and other celestial objects - be used for "exclusively peaceful purposes," and says that no country on Earth can lay claim to outer space.

The question of space law became a live topic in August 2019, when American astronaut Anne McClain was accused of committing what could have been the first space crime.

McClain's estranged wife, Summer Worden, claimed that the NASA astronaut had wrongfully accessed her bank accounts while in orbit around the Eearth, although Worden was later charged with making up the allegations.

But as space crimes go, it was relatively simple from a legal perspective.

In a 2019 article, Montreal-based McGill University professor Ram Jakhu pointed out that as both McClain and Worden were US citizens, the crime was alleged to have taken place in a US module of the ISS and affected assets held in the US, it was clear that American law would apply.

However, as the amount of human activity in space increases, he said, the nature of space crime could become more complex - and require a more complex solution.

"As humanity approaches a time when humans may realistically be living and working in space, an international centralised space governance system will be needed to bring all nations, individuals and institutional entities involved in space utilisation under a common legal system and jurisdiction," Jakhu wrote.