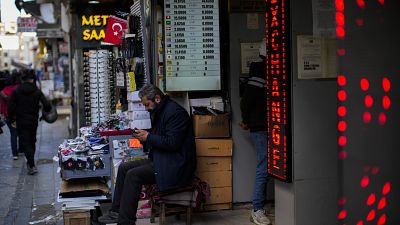 A screen displays exchange rates in a currency exchange shop in a commercial street in Istanbul.   -   Copyright  AP Photo/Francisco Seco
By Euronews and AP  •  Updated: 06/05/2022

Turkey's cost of living crisis is growing after official data showed that inflation in the country rose to nearly 70 per cent.

Skyrocketing prices have placed significant pressure on households and ramped up criticism of President Recep Tayyip Erdogan head of next year's election.

Consumer prices rose by 69.97 per cent in April compared with the previous year, according to the Turkish Statistical Institute. It represents the largest year-on-year increase in two decades since 2002.

The biggest price increases in Turkey last month were in the transportation sector (106 per cent) followed by food and non-alcoholic beverage prices (89 per cent), according to the data.

Critics have blamed the soaring prices on Erdogan’s economic policies, which favour lowering interest rates to boost growth and exports.

The Turkish leader has opposed high borrowing costs, insisting that they cause inflation. The Turkish lira lost 44 per cent of its value against the US dollar last year.

Russia’s invasion of Ukraine -- and the resulting surge in gas, oil and grain prices -- has compounded the situation in Turkey, a country reliant on imports.

In an effort to soften the blow on households, the government has implemented tax cuts on basic goods and has adjusted electricity tariffs.

Erdogan told reporters last week that inflation would begin to recede as of May and reach a “more favourable direction” at the end of the year.

Despite polls predicting a close election, the 68-year-old hopes to be re-elected in 2023 after two decades as prime minister and then president.

Which parts of the Eurozone are being hardest hit by record inflation?