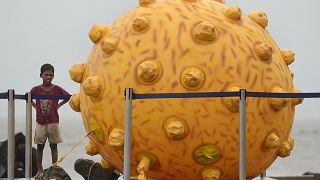 At least one child has died after falling ill from a mysterious outbreak of acute hepatitis that has infected children in 10 European countries, the World Health Organization (WHO) has confirmed.

As of April 21, there had been at least 169 cases of "unknown origin" around the world, the WHO said on Saturday.

"Cases are aged 1 month to 16 years old. 17 children (approximately 10 per cent) have required liver transplantation; at least one death has been reported," the WHO said on Saturday.

Hepatitis is inflammation of the liver, which is a vital organ for processing nutrients, filtering blood, and fighting infections.

While the WHO said that the cause of the infections was still being investigated, the UN body noted that an adenovirus infection leading to acute hepatitis was one possible option under consideration.

"The common viruses that cause acute viral hepatitis (hepatitis viruses A, B, C, D, and E) have not been detected in any of these cases," the WHO said in a statement, adding that adenovirus had been detected "in at least 74 cases".

Where have cases been detected?

As of April 21, 114 cases had been reported in the United Kingdom, 13 in Spain, 12 in Israel, nine in the United States, six in Denmark, fewer than five in Ireland, 4 each in the Netherlands and Italy, 2 in Norway and France and 1 each in Romania and Belgium, the WHO said.

The WHO did not reveal where or when the death had taken place.

Adenoviruses can cause a range of different illnesses, ranging from mild to more severe.

According to the US Centers for Disease Control and Prevention (CDC), people infected with an adenovirus can display cold or flu-like symptoms, fever or sore throat, as well as more severe illness like acute respiratory infections like bronchitis or pneumonia.

They can also cause gastroenteritis, an inflammation of the stomach or intestines that can cause diarrhoea, vomiting, nausea and stomach pain.

Adenovirus type 41, the particular strain identified as having a possible link to the hepatitis cases, usually causes symptoms of diarrhoea, vomiting and fever, as well as respiratory symptoms, the CDC said.

However, the WHO warned that the possibility that adenovirus infection was behind the acute hepatitis cases was just a theory.

The United Kingdom, which has seen 114 of the reported 169 acute hepatitis cases, said on Thursday that it was investigating whether a change in the genome of the adenovirus could be responsible for the acute hepatitis infections.

As it is not usual to see this pattern of disease from adenovirus, we are actively investigating other possible contributing factors

"Information gathered through our investigations increasingly suggests that this is linked to adenovirus infection. However, we are thoroughly investigating other potential causes," Dr Meera Chand, Director of Clinical and Emerging Infections at the UK Health Security Agency (UKHSA), said.

According to the UKHSA, 77 per cent of acute hepatitis cases tested were positive for adenovirus.

"However, as it is not usual to see this pattern of disease from adenovirus, we are actively investigating other possible contributing factors, such as another infection (including COVID-19) or an environmental cause," the UKHSA said.

"There is no link to the COVID-19 vaccine," the UKHSA said, adding that none of the confirmed cases in the UK so far have been vaccinated.

In a statement, the CDC said doctors should "consider adenovirus testing" of children who appear to have hepatitis of unknown origin.