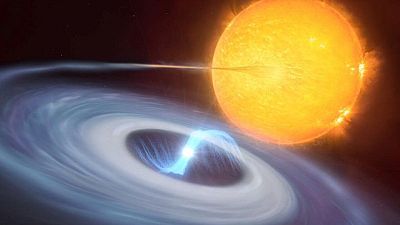 WASHINGTON – Astronomers have detected a previously unknown type of stellar explosion called a micronova involving thermonuclear blasts at the polar regions of a type of burned-out star called a white dwarf after it has siphoned material from a companion star.

The researchers said on Wednesday a micronova is by far the least powerful type of star explosions now known – less energetic than a blast called a nova in which a white dwarf’s entire surface blows up and tiny compared to a supernova that occurs during the death throes of some giant stars.

“The discovery was an unexpected surprise. It goes to show just how dynamic the universe is. These events are fast and sporadic. Finding them requires looking at the right place at the right time,” said astronomer Simone Scaringi of Durham University in England, lead author of the study published in the journal Nature.

White dwarfs, among the densest objects in the universe, result from the collapse of a dying star’s core. They have the mass of our sun but are about the size of Earth in diameter. Most stars, including the sun, are destined to end their existence in this form.

Some white dwarfs are part of what is called a binary system, in an orbit with another star.

At the base of accumulating columns of gas at the white dwarf’s poles, pressure and temperature rise, causing thermonuclear fusion that converts hydrogen into helium.

“Under the conditions in which this is triggered, this fusion is explosive, and the micronova occurs: a thermonuclear ‘bomb’ goes off,” said astronomer and study co-author Paul Groot, who divides his time between Radboud University in the Netherlands and the University of Cape Town and South African Astronomical Observatory.

The explosion is localized and does not destroy the white dwarf. In fact, the micronova cycle can repeat itself.

“Only a very small percentage of the white dwarf participates in this explosion, roughly about one millionth of the surface area. Translated to the Earth this would be an area of about, say, the city of London,” Groot added.

Each micronova event burns through material the equivalent of one large asteroid, or just over one millionth of Earth’s mass, Scaringi said.

A micronova is similar to a nova, a thermonuclear explosion engulfing a white dwarf’s entire surface. With novae, the white dwarf lacks a strong magnetic field, meaning that hydrogen stolen from the companion star is distributed globally rather than concentrating at the poles. Novae can last for weeks or months, burning through about a million times more mass than micronovae, Scaringi said.

Some other types of stellar explosions include: a kilonova, when two neutron stars or a neutron star and a black hole merge; a hypernova, a kind of supernova involving a massive star exploding at end of its life cycle and collapsing to form a black hole; and a luminous red nova involving two stars merging.