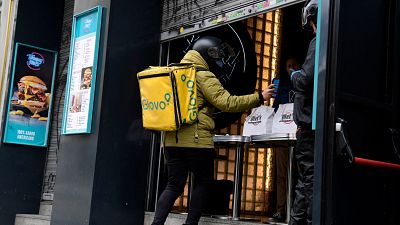 The request by a user of the Spanish food delivery app Glovo has provoked outrage   -   Copyright  JAVIER SORIANO / AFP
By Tom Bateman  •  Updated: 20/04/2022

"Please could the delivery person take the bins out?"

It sounds simple enough, but the request by a user of the Spanish food delivery app Glovo has provoked outrage and drawn attention to the precarious position of gig workers in Spain.

A photo, posted on Twitter by Paco Moreno, a trainer for Spain's CCOO union, shows a paper slip that riders working on behalf of the delivery platform receive when collecting an order from a restaurant.

Along with a description of the food to be delivered, a section marked "allergies" contains a request from the customer: "Please could the delivery person drop the food by the door and then take the rubbish with them on their way out?"

"This has to be a joke, right?" one commenter wrote. "You've got to be shameless to leave a note like that," another said.

"I have seen situations with riders like this and in some cases the client gives a tip and in others not," Moreno told Euronews Next via direct message.

While the photo was not originally his, it came from a group chat of delivery workers he is a part of, Moreno said.

The response to Moreno's post wasn't entirely outrage, however. "How can this be the app's fault? That's absurd," another commenter said.

The problem, Moreno said, is that while the request in this case might not sound like much, refusing to take the rubbish and upsetting the customer could have financial consequences for a Glovo rider - the majority of whom still work for the company as independent contractors.

According to the information I have from riders' groups on Telegram and WhatsApp, they didn't take the rubbish out.

"Self-employed riders such as those at Glovo are often rated by customers and of course in some cases not agreeing to these requests can mean a lower score, and that affects the orders you are given," he said.

Despite the alleged risks, Moreno told Euronews Next that the customer's request for help with the bins went unfulfilled.

"According to the information I have from riders' groups on Telegram and WhatsApp, they didn't take the rubbish out," he said.

Euronews Next contacted Glovo to confirm whether or not its system for distributing orders to riders ranked them according to factors like customer feedback, but the company did not immediately respond.

The company has faced criticism in Spain for its response to the "rider's law," a piece of legislation enacted last year that - in theory - obliged platform companies to hire their workers as employees.

The reality has been more complicated.

Glovo hired roughly 2,000 workers in its so-called "dark store" distribution centres, but not the 8,000 delivery workers on its platform.

Instead, it made algorithmic changes that effectively allowed riders to bid for work as contractors, sometimes undercutting each other in the process.

Glovo has previously stated that it has not broken any laws and that it has taken steps to comply with the terms of the rider's law.