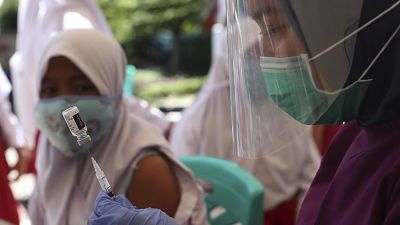 A single-dose vaccine for the Human Papillomavirus (HPV) has been hailed as a potential "game changer" by experts at the World Health Organization (WHO).

An April meeting of the WHO’s Strategic Advisory Group of Experts on Immunization (SAGE) concluded that a single dose had comparable efficacy to the two or three-dose regimens, delivering "solid protection" against the virus.

The group evaluated the evidence that has been emerging over the past few years about the potential effectiveness of a single-dose vaccine.

The WHO said the findings could be a "game changer" for the prevention of the disease, with more doses of the lifesaving jab reaching more girls.

HPV is the most common sexually transmitted disease, and it causes 95 per cent of cervical cancer.

Cervical cancer is the fourth most common type of cancer in women globally, according to WHO statistics.

HPV immunisation in poorer countries is a concern

The WHO states that 90 per cent of women with cervical cancer are living in low and middle-income countries, where there are worries about the slow introduction of the HPV vaccine.

"The HPV vaccine is highly effective for the prevention of HPV serotypes 16 & 18, which cause 70 per cent of cervical cancer," said SAGE chair Dr Alejandro Cravioto.

"SAGE urges all countries to introduce HPV vaccines and prioritise multi-age cohort catch up of missed and older cohorts of girls. These recommendations will enable more girls and women to be vaccinated thus preventing them from having cervical cancer and all its consequences over the course of their lifetimes".

The group now recommends a one or two-dose schedule for girls aged 9-14 and young women aged 15-20, and two doses for women older than 21.

It adds there is limited evidence of single-dose efficacy for immunocompromised people, who should have at least two doses.

"I firmly believe the elimination of cervical cancer is possible. In 2020, the Cervical Cancer Elimination Initiative was launched to address several challenges including the inequity in vaccine access," WHO Assistant Director-General Dr Princess Nothemba (Nono) Simelela said.

"This single-dose recommendation has the potential to take us faster to our goal of having 90 per cent of girls vaccinated by the age of 15 by 2030".

Factors blamed for the low coverage of HPV vaccines include supply challenges and costs related to having two-dose regimens as well as the cost itself of the vaccines for poorer countries.

The WHO said a single-dose option would be less costly, less resource intensive, and easier to administer, facilitating catch-up campaigns for multiple age groups.

A study published on April 11 backs up the findings of the WHO SAGE group.

Researchers said the trial of 2,275 women in Kenya showed a single-dose vaccine was "highly effective".

After 18 months the vast majority of the women had been protected from different strains of HPV, with single-dose efficacy the same as multiple-dose.

"These findings are a game-changer that may substantially reduce the incidence of HPV-attributable cervical cancer and positions single-dose HPV vaccination as a high-value and high-impact public health intervention that is within reach for us," said Professor Sam Kariuki, acting director-general at the Kenya Medical Research Institute, where the study was conducted.

It was published in the digital journal NEJM Evidence.

Researchers said more studies need to be done to test how long the vaccine lasts.

Most sexually active women and men will be infected with HPV at some point in their lives and some will be repeatedly infected.

While nine out of 10 HPV infections resolve on their own in two years, others lead to cancer of the reproductive system, mainly cervical cancer.

HPV also can cause cancers of the cervix, vagina, vulva, penis, and oropharyngeal cancer (throat, tongue, and tonsils).

There are currently three HPV vaccines approved for use in Europe, all of which provide protection against two of the riskiest types of the virus, HPV 16 and 18.

The European Centre for Disease Prevention and Control (ECDC) states that currently the vaccines are given in a two-dose regimen over a six-month period for girls aged 9-15 and three doses for those aged 16 and older.

Because the vaccines do not provide protection from all types of HPV, it is recommended for women to get cervical cancer screening, which the European Cancer Organisation says can reduce cervical cancer mortality by up to 90 per cent.

It adds that screening programmes will remain an essential element of the management of cervical cancer for the foreseeable future because vaccination only began in Europe in 2008, and there are no countries that have achieved 100 per cent vaccination uptake.