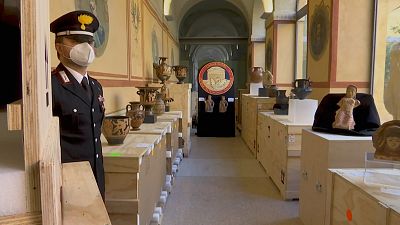 For most people, museums are where we go to look at works of art or ancient artefacts. But those who can afford it prefer to have them much closer, paying millions to display exclusive pieces in their living room or study.

The collection of art and antiquities is worth $50 billion (€45 billion) globally. But whether it’s a rare painting or a unique sculpture there is also unfortunately an ugly side to the art market - and that’s illegal trade.

It's estimated that the illegal art trade makes up about 5 percent of the whole industry, and while that may seem like a small figure, it appears to be a stubborn and growing problem that’s increasingly tarnishing the art world.

During the worst surges of the pandemic, the whole world was locked down but trade in the antiquities black market was more active than ever, generating $10 billion (€9 billion) in just two years. Organisations like UNESCO and INTERPOL tell us that too often, money doesn’t trickle down to the people whose livelihoods depend on finding cultural treasure, and worrying sums are being diverted to fund criminal activities.

The UN’s agency for culture and education, UNESCO has for decades led global efforts in preserving cultural heritage in a safe way.

"Since 20 or 30 years, it has become a very huge shift in some parts of the market, and it represents five percent of the market with a huge volume of money that these deals now where it has become easier to traffic antiquities. Many of them are World Heritage sites, and there is a lot that we don't know. And the reason is very specific - all these sites that are not yet discovered or in [the] process to be researched are not inscribed anywhere, so it's antiquities that we didn't know existed."

Cracking down on antiquities crime

The sale of stolen antiquities is taking place on a global scale, so it needs an international network of law enforcement.  That’s where INTERPOL steps in. The organisation has a whole department dedicated to fighting crimes against cultural property.

The international crime-fighting agency says the world is facing unprecedented looting of cultural heritage from war-torn countries. By the time these artefacts get to collectors or museums, it’s hard to tell if they have been taken illegally.

In an effort to combat this, INTERPOL has launched a smartphone app called ID-art that can help with the identification of these so-called 'blood antiquities'.

“Since this is a global phenomenon, countries need to work together. The role of INTERPOL is primarily to support our member countries and our specialised units in this field," explains Corrado Catesi, INTERPOL's Head of Works of Art Unit.

"With the mobile application ID Art, you can understand if an object is included in our database. If the object appears, it means it was stolen. The most special thing, a red button, will allow you to report to INTERPOL the item found.

"ID Art is an application that is a perfect tool for police officers, customs officials, art dealers, [the] general public or artists. In Spain and Romania, for example, some specialised units have already recovered art items thanks to the application," Catesi says.

...it's just a crime against humanity.

While UNESCO and INTERPOL are raising awareness and educating art collectors and the public about stolen cultural property, can more be done to crack down on the crime?

Deborah Lehr from the Antiquities Coalition argues stealing cultural property is similar to burglary and warrants a harsher punishment than at present.

Despite the pandemic, the global art and antiquities industry has managed to thrive, with more sales and auctions than ever. And while illegal trade makes up just a small segment of the market, it has the potential to tarnish the reputation of some very big stakeholders, including art collectors and many of the world’s leading museums.