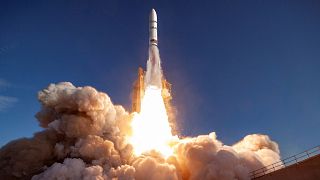 Amazon's plans to compete with Elon Musk's SpaceX by beaming satellite broadband to customers worldwide have taken a step forward after the company secured rocket launch agreements with partners in the United States and Europe, it announced on Monday.

"Amazon is investing billions of dollars across the three agreements. Together, it is the largest commercial procurement of launch vehicles in history," an Amazon spokesperson told Reuters.

Amazon's agreements with the three companies include 38 launches on ULA’s Vulcan Centaur rocket, 18 launches on Arianespace’s Ariane 6, and 12 launches on Blue Origin’s New Glenn, with the option of an additional 15 launches.

These come on top of the nine satellite launches Amazon agreed with ULA last year, for a total of 92.

"It's the largest contract ever signed by Arianespace in its history," ArianeGroup CEO André-Hubert Roussel told Reuters, declining to provide financial details.

"It's the result of two years and half of talks with them," he said, adding that the launches would take place between 2024 and 2027.

The first two prototype Project Kuiper satellites are due to enter orbit by the end of 2022, with the full constellation to follow over an estimated five-year period, Amazon said.

Competitor SpaceX's Starlink constellation currently consists of over 2,000 satellites in orbit, according to figures collated by Harvard astrophysicist Jonathan McDowell.

Internet connections via LEO satellites are expensive to put in place, but can give people in areas poorly served by ground-based cable and mobile networks access to broadband via constellations of thousands of small satellites orbiting around 550 km above the Earth's surface.

But while Amazon is pressing ahead with Project Kuiper, there are signs that the scramble for space is running into opposition on the ground.

On Tuesday, France's highest administrative court effectively overturned Starlink's permit to operate in the country following legal action brought by activists opposed to the technology on health and environmental grounds.

The Conseil d'Etat court said the French regulator's February 2021 decision to grant Starlink the use of two wireless frequency bands for its service should only have been taken after a public consultation, as the SpaceX service "could impact the market of access to high-bandwidth internet and affect the interests of end users".

French environmental group Agir pour l'Environnement, which campaigns against the potential impact of low Earth orbit satellite constellations on the visibility of stars in the night sky, said the regulator should now "carry out a proper economic and environmental assessment" of Starlink's project.