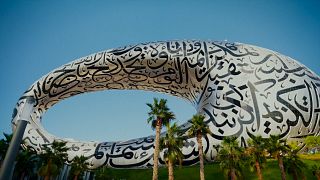 The Museum of the Future has opened in Dubai. The seven-storey pillarless landmark has been described as ‘the most beautiful building in the world’.

Standing at 77 metres tall it features a stainless steel facade illuminated by 14000 metres of Arabic calligraphy.

The intellectual and scientific hub hopes to bring together the very best minds in science, technology and innovation and is poised to set and position Dubai as a testbed for emerging technologies and an exploration base for talents, inventors and creative professionals from all over the world.

“[It] provides the people element, which is the most important ingredient for innovation and development,” she said adding, “for us, it's a major ingredient in the development of the economy and the further diversification of the economy, and more importantly, for increasing the impact and outcomes from existing sectors of the economy.”

Inside, visitors are taken on an experiential journey to the year 2071 which will be the centenary of the founding of the UAE.

Khalfan Belhoul, CEO of Dubai Future Foundation, explained how this museum is like no other.

“Unlike typical museums where the value of the displays appreciates in value with time because it becomes older, when you talk about the future, you need to constantly stay future relevant. So we are very excited about how we can continuously create that story,” he said.

With an emphasis on virtual and augmented reality, Big Data, robotics and AI, the museum will also host innovation labs dedicated to several sectors, including health, education, smart cities, energy and transport, as well as testing new inventions in partnership with research institutes and universities.