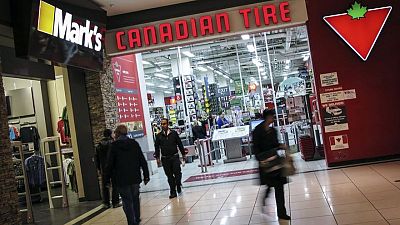 – Canadian Tire Corp Ltd said on Thursday it would invest C$3.4 billion ($2.66 billion) over the next four years on its physical and online presence, as it looks to build on the gains made from the pandemic-led online surge.

To lure more customers and get a bigger share of their spend as competition grows, retailers are beefing up their online business and offering everything from attractive loyalty programs to personalized promotions online.

Toronto, Ontario-based Canadian Tire said it would expand its rewards program and rollout its premium annual membership across its stores nationwide, while also introducing over 12,000 new products under its owned brands by 2025.

The owner of SportChek and Mark’s store banners also said it would invest about C$675 million to boost its supply chain infrastructure by adding more warehouse space and opening a new e-commerce fulfillment center.

Canadian Tire said about C$1.2 billion of its investment would go toward improving the connection of its digital and physical channels, to boost its same-day pickup options, including curbside.

Canadian Tire said it expects to grow same-store sales, excluding fuel, by more than 4% annually by 2025, with a profit target of more than C$26 per share.

The company reported earnings of C$18.38 per share last year and had recorded a nearly 30% surge in e-commerce sales.