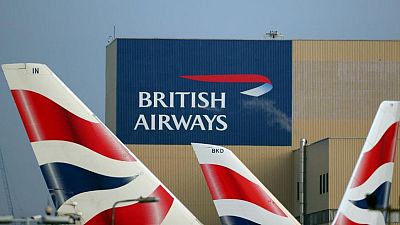 By Pavel Polityuk and Jamie Freed

KYIV – Two Ukrainian airlines disclosed problems in securing insurance for some of their flights on Monday while foreign carriers began avoiding the country’s airspace as Russia masses a huge military force on its border.

Russia and Ukraine both hinted at fresh diplomatic efforts to avoid conflict on Monday, but Ukraine’s biggest airline said its insurers had already terminated cover for at least some of its aircraft on flights inside Ukrainian airspace.

Ukraine International Airlines (UIA) said it had received the notification from its insurers as experts said more airlines were expected to avoid Ukraine’s airspace after a U.S. warning that Moscow could invade its neighbour any time.

“UIA is making efforts and is constantly negotiating with insurance companies, the ministry of infrastructure of Ukraine, the state aviation administration and hopes for mutual understanding,” the Ukrainian airline said in a statement.

Low-cost carrier SkyUp, which had to divert a flight from Portugal on Saturday after the plane’s owner barred it from entering Ukrainian airspace, said it had resumed selling tickets after an agreement with the Ukrainian government.

“Negotiations with insurers have been difficult and our foreign partners continue to regularly assess their own risks and monitor the situation,” the airline said in a statement.

Neil Roberts, head of marine and aviation with the Lloyd’s Market Association, representing underwriters at the world’s leading insurance market Lloyd’s of London, said insurers told clients they could give just 48 hours notice to exclude Ukraine but that did not mean cover had been terminated.

“It means that there is an invitation to negotiate coverage. War risk insurance cover is being agreed in some cases on a rolling 24 hour or 48 hour basis, which is prudent,” he told Reuters.

Ukraine Prime Minister Denys Shmygal on Sunday said the government had allocated 16.6 billion hryvnia ($592 million) to ensure flight safety for insurance and leasing companies to guarantee continuation of flights through its airspace.

Airlines were drawing up plans on Monday for skirting around Ukraine, parts of which have been avoided since 2014, but officials said a far greater concern would be any impact on the use of Russian airspace in any tit-for-tat sanctions war.

Dutch airline KLM earlier said it would halt flights to Ukraine and through its airspace, while Germany’s Lufthansa said it was considering a suspension.

British Airways (BA) flights between London and Asia on Monday appeared to be avoiding the airspace, according to Reuters monitoring of flight tracking service FlightRadar24.

The same website showed tracks of a U.S. Air Force Global Hawk intelligence-gathering military drone sweeping back and forth across the country from west to east on Monday.

UIA said that, at the request of aircraft leasing firms, five Boeing 737-800 had been flown to Spain, while two other planes had been sent to Serbia for scheduled maintenance. UIA has 25 planes in its fleet, according to its website.

Leasing firms control the majority of the world’s fleet.

The situation for the rest of the airline’s fleet was not immediately clear, while UIA asked passengers to closely follow its website for any news on the airline and its schedule.

A BA pilot said on Twitter on Sunday there was a longer flight time for a freighter service from London to Bangkok because of “current geopolitics”. BA did not respond immediately to a request for comment.

“My guess would be that Ukraine will become unavailable pretty soon if what we’ve seen over the weekend crystallises into a couple of more carriers actually pulling the pin,” said Mark Zee, founder of flight operations association OPSGROUP.

“I don’t think it will be government advice that’s doing it so much as it will be insurance-based unavailability or carriers looking at other carriers. So if you have KLM, Lufthansa and British Airways, for example, deciding not to overfly Ukraine at all, we’re almost back into an MH17 scenario.”

Malaysia Airlines flight MH17 was shot down over eastern Ukraine in 2014, killing all 298 people on board, two thirds of them Dutch citizens. Some airlines were already avoiding the airspace after military aircraft had been shot down.

Zee said avoiding Ukraine’s airspace would have the biggest routing impact on airlines from neighbouring countries but was not expected to add much to the cost of long-haul flights.

News agency Interfax Ukraine said Ukrainian insurance companies had received a notification from reinsurers that airlines were not covered for war risks.