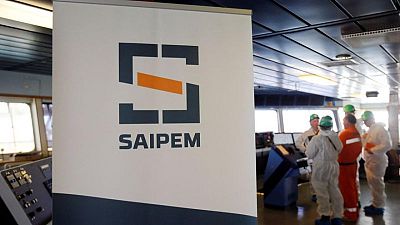 By Stephen Jewkes and Francesca Landini

MILAN – Italy’s Saipem does not face a liquidity crunch for now and should meet an April bond repayment deadline, ratingsagency S&P said, as it races to come up with a rescue plan.

The energy services group shocked investors last week when it warned it would report a 2021 loss of over one-third of its equity, forcing it to come up with measures to plug the gap.

It blamed 1 billion euros ($1.15 billion) of cost overruns at projects, including an offshore wind farm in Scotland and onshore engineering and construction contracts.

“We believe they will repay or refinance the 500 million euro bond (expiring April 5),.. It won’t create a credit crunch,” S&P analyst Edouard Okasmaa told Reuters in a phone interview.

After the profit warning, S&P downgraded the company to ‘BB-’ from ‘BB’ and warned it could cut further in the coming 90 days.

At the end of September, Saipem had 2 billion euros of liquidity of which 700 million were immediately available.

Sources said the company was auditing its order backlog to see if there were any more troublesome contracts like the wind farm.

“We understand there are no big cost overruns of this magnitude in other projects… but we want to understand if there are additional negative developments,” Okasmaa said.

The group said last week that, given the size of the losses, banks could ask for early repayment of loans unless specific waivers were granted.

“We understand there are some waivers that were granted by the banks at the end of the year. Those waivers need to be given again at some point in 2022,” Okasmaa said.

Saipem’s losses from the overruns mean that, for the full year, the company is likely to breach loan covenants with banks that net debt should not exceed 3.5 times core earnings.

Okasmaa says the company was likely to remain above that metric at the end of 2022, though that depended on what support it got from its core shareholders.

Saipem is talking to Eni and CDP on a financing package that sources said could include a capital increase of more than 1 billion euros.

“We continue to assume the shareholders will be supportive,” Okasmaa said.