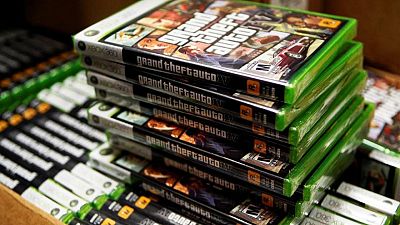 -Take-Two Interactive Software Inc on Monday projected fourth-quarter revenue below market expectations, a sign that its thin lineup of new titles would overshadow the boost from the “Grand Theft Auto” franchise.

The publisher of “NBA 2K” and “WWE 2K” games also missed estimates for net bookings – the total amount products and services sold digitally or in stores – in the last three months of 2021, sending its shares 3% lower after the bell.

The company has relied on the “Grand Theft Auto” franchise to bring in much of its revenue in recent years and last week teased the latest entrant in its best-selling game series.

But the botched launch last year of the remastered versions of old Grand Theft Auto titles, called “The Trilogy”, has disappointed many gamers.

“Very occasionally, we fall short. And I think The Trilogy was an example of that,” said Chief Executive Officer Strauss Zelnick, referring to the glitches in the games.

The company’s slate for the year includes “WWE 2K22”, “Kerbal Space Program 2” and “Grand Theft Auto: The Trilogy” for mobile.

The weak results from Take-Two, which has made an offer to buy “FarmVille” maker Zynga, follow similar earnings from rivals Activision Blizzard Inc and Electronic Arts Inc.

The video-game publishers are grappling with a slowdown in the pandemic gaming boom after COVID-19 curbs eased globally.

Take-Two said it expected adjusted revenue between $808 million and $858 million for the fourth quarter, while analysts had estimated $924.24 million, according to Refinitiv IBES data.