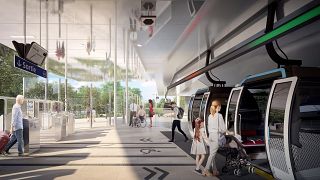 Bus, metro, train, tram… gondola? Paris' public transport system looks set to add another method of getting around the French capital after proposals to build a new cable car line passed a round of studies last week.

The Câble 1 (C1) line will link the southeastern suburbs of Créteil and Villeneuve-Saint-Georges with the subway lines of the Paris Métro, making the 4.5 km journey in 17 minutes - less than half the time the same journey takes by bus today.

Construction will begin this year, with the cable car opening to passengers in 2025, Laurent Probst, director general of regional transport authority IDFM told the Parisien newspaper.

Paris's C1 cable car wouldn't be the first urban aerial tramway in France. In 2016, the city of Brest opened a 460-metre-long cable car route linking neighbourhoods across a river.

Why a cable car?

Documents from the project's long planning phase reveal that a cable car was not the only option on the table.

Paris' city planners considered three other possibilities: adding more buses in the area, building a new bridge to link to the Créteil Pointe du Lac Métro station directly, and improving transport connections to another nearby station.

While Paris is nowhere near as mountainous as most other cities that rely on cable cars, such as La Paz in Bolivia, Créteil's difficult geography helped decide in the cable car's favour.

A motorway, a high speed train line and a railway yard all cut through the area, making typical overground options like tram lines difficult to put in place. By skipping over the top of the obstacles, the cable car could offer a cheaper solution with an estimated price tag of €132 million.

If the C1 makes it into service, Paris will join the ranks of cities around the world that use cable cars for public transport.

Along with La Paz, Medellin in Colombia and Bolzano in northern Italy are known for their public transport cable cars, while some homeowners in the New Zealand capital of Wellington install their own personal cable car systems to travel up the city's steep hillsides.

If C1 goes well, the Ile-de-France region surrounding Paris could follow it with up to twelve cable car lines currently under consideration