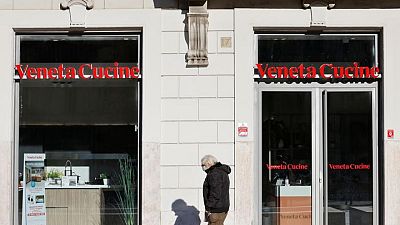 MILAN – For years Dionisio Archiutti had seen his father toy with the idea of bringing a new investor into the family business, but he knew time would not necessarily help the 80-year-old decide.

“Italian entrepreneurs often tighten their grip on their firms as they get older, fearing there may not be a future without them at the helm,” he said.

Yet a year into the pandemic, Giacomo Carlo Archiutti sold 30% of the kitchen manufacturer he founded in 1967 in Italy’s industrial north east to a private equity firm.

Pre-pandemic the Archiuttis would have stood out as a rarity, an Italian family-owned business welcoming an external investor as a first step to addressing succession planning.

Now, however, bankers say they are overwhelmed by requests to examine possible deals from small and mid-sized (SMEs) companies facing challenges from supply chain disruption to financing investments required to keep them up to speed with digital and environmental business standards.

“The pandemic has shown companies they can get hit by a tsunami, making them aware they need to deal with generational change,” NB Aurora Managing Director Francesco Sogaro said.

For the Archiuttis, NB Aurora now has two of Veneta Cucine’s five board seats and works alongside the family to steer its growth strategy in a “subtle yet effective” way.

“You certainly can’t expect to tell businessmen of my father’s generation what to do. Yet thanks to the fund’s expertise we’ve taken some bolder steps,” Archiutti said.

Family-owned businesses are the backbone of the Italian economy and nearly a third of them are in the hands of a leader in their 70s, data from Bocconi University’s AUB research hub shows. And succession remains a deep-seated problem.

GRAPHIC: CEO over 70 years old, https://fingfx.thomsonreuters.com/gfx/mkt/lgpdwxnkavo/Over70.png “We are small and we’re old,” said Francesco Casoli, chairman of AIDAF, the association of family-owned companies, which according to data firm Cerved account for nearly 70% of Italy’s 148,530 SMEs.

Clingy owners have been blamed by the Bank of Italy for holding back growth, by blocking investments needed to drive productivity and putting off skilled managers.

The COVID-19 crisis, which has caused more than 147,000 deaths in Italy, the second-worst toll in Europe after Britain, combined with the worst economy slump since World War II, appears to have convinced some to let go.

“Deals we’d been discussing for years, without owners ever finding the courage to take the leap, suddenly gained traction,” NB Aurora’s Sogaro added.

The Illy and Vergnano families, for example, both welcomed a minority investor into their respective coffee businesses last year as they pursue international expansion plans.

“The production freeze during the first COVID wave sent companies panicking. They got over the worst only to find themselves wrestling with skyrocketing energy prices and scarce raw materials and components.”

For Stefano Giudici, Nomura’s Italy head of investment banking, companies which emerged as winners in the pandemic have the additional incentive of seizing on high market valuations at a time when pent-up demand and European Union recovery spending boost their growth prospects.

“These two elements create a momentum many business owners want to take advantage of,” he said.

Veneta Cucine’s 2021 sales soared 40% to around 280 million euros, with demand for home furniture at its strongest since the 1990s, Archiutti says.

And the surge in demand for private capital in a market still under-penetrated by funds has also led to a proliferation of so-called club deals, backed by groups of small investors.

QCapital, a club deal firm targeting SMEs with revenue of up to 40 million euros, said it had met with some 120 companies interested tapping outside capital since starting in May.

The deal rush represents an opportunity for banks which are increasingly combining advisory and corporate finance services for SMEs with their wealth management activities, enabling them to funnel money from ultra-wealthy individuals into companies.

Foreign banks are looking to cash in too.

To defend a patch it has traditionally dominated, Italian investment bank Mediobanca has in the past two years doubled its team of bankers dedicated to M&A for mid-market firms, which it combines with private banking services.