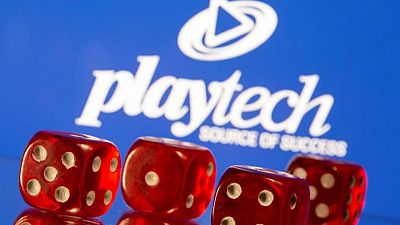 Australian gaming company Aristocrat had needed approval from 75% of Playtech shareholders at Wednesday’s meeting, but less than 55% of votes were cast in favour of the deal.

Playtech’s share price rose 5% by 1348 GMT after the London-listed company said it was considering other approaches, without elaborating.

TT Bond Partners had advised on an earlier bid for Playtech from Gopher Investments, but Playtech’s board has granted a request to release TT from restrictions preventing it from tabling a further offer, the report https://news.sky.com/story/asian-based-investment-group-tt-bond-partners-weighs-fresh-2-bn-playtech-bid-12531405 said.

Playtech declined to comment on the Sky News report, while TT Bond did not immediately respond.

Merger and acquisition business in the gaming and gambling sector has been brisk since the onset of the COVID-19 pandemic, with lockdowns boosting the popularity of online gaming.

Many of the takeover targets have been UK bookmakers, with suitors looking to acquire British expertise in the field. Ladbrokes-owner Entain has staved off two approaches from U.S. rivals in the past year.

JKO had planned to sell Playtech’s Italian business to Entain before Jordan withdrew in January, the Financial Times reported.

Analysts at brokerage Peel Hunt turned bullish on Playtech’s stock after the company pointed to other M&A proposals, upgrading it to “buy” from “add” and raising its price target to 700 pence, above Aristocrat’s offer of 680 pence per share.

“The emergence of a certain group of shareholders who built a blocking stake while refusing to engage with either ourselves or Playtech materially impacted the prospects for the success of our offer,” Aristocrat Chief Executive Officer Trevor Croker said in a statement before the voting results were announced.

Aristocrat, which will not be able to make another Playtech bid for six months under UK takeover rules, said that most of the dissenting shareholders took stakes in the company after its offer was announced in October.

It had previously asked Britain’s takeover regulator to rule whether a group of Asian investors who bought large stakes were acting as a concert party in a potential breach of takeover rules, Sky News reported in December.

The two are among Playtech’s top 10 shareholders. They could not be reached for immediate comment.