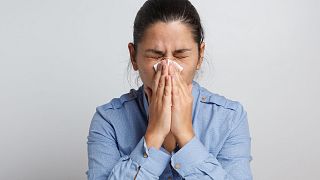 The body's natural response to catching a cold can help fight COVID-19, a new study says - but you should still get vaccinated   -   Copyright  Getty Images via Canva
By Tom Bateman  •  Updated: 10/01/2022

Catching a cold could help your body defend itself against COVID-19 and affect whether or not you get the virus after being exposed to it, new research suggests.

Researchers found that the T cells the body produces to fight the common cold - which, like COVID-19, can also be caused by coronaviruses - were able to recognise and attack the virus.

T cells are white blood cells which form a key part of the immune system.

"We found that high levels of pre-existing T cells, created by the body when infected with other human coronaviruses like the common cold, can protect against COVID-19 infection," said study author Dr Rhia Kundu from Imperial College London.

The findings of the peer-reviewed study, published in the Nature Communications journal on Monday, could also hold the key to developing the next generation of vaccines against current and future COVID-19 variants, the researchers said.

But while the study found that people with higher levels of pre-existing T cells were less likely to catch COVID-19, its authors stressed that no-one should count on a cold to guard against infection - not least because not all colds are caused by coronaviruses.

"I would stress that no one should rely on this alone. Instead, the best way to protect yourself against COVID-19 is to be fully vaccinated, including getting your booster dose," Kundu said.

The UK-based, small-scale study by Imperial’s National Heart and Lung Institute took blood samples from 52 participants after they were exposed to COVID-19 at home.

Analysis of the samples showed that the 26 participants who were infected with the virus after being exposed to it had lower levels of "cross-reactive" T cells than the 26 who did not become ill with COVID-19 after exposure.

The reason for the cross-reactive T cells' effectiveness stems from the way they target the virus, the researchers said.

"These T cells provide protection by attacking proteins within the virus, rather than the spike protein on its surface," said Professor Ajit Lalvani, senior author of the study.

By comparison, current COVID-19 vaccines promote an immune response that targets the virus' spike protein, the surface part of the virus that interacts with the cells in our bodies.

But as the Omicron variant has shown, mutations in the spike protein can reduce the effectiveness of the current generation of COVID-19 vaccines.

"In contrast, the internal proteins targeted by the protective T cells we identified mutate much less. Consequently, they are highly conserved between the various SARS-CoV-2 (COVID-19) variants, including Omicron," Lalvani said.

"New vaccines that include these conserved, internal proteins would therefore induce broadly protective T cell responses that should protect against current and future SARS-CoV-2 variants," he added.

While the researchers said their study provided the "the clearest evidence to date" that T cells resulting from catching a cold could help fight COVID-19, the small number of participants, 88 per cent of whom were white Europeans, meant they could not model whether or not people in other demographic groups would experience the same effect.

Scientists have made synthetic 'blood' to catch and kill mosquitoes