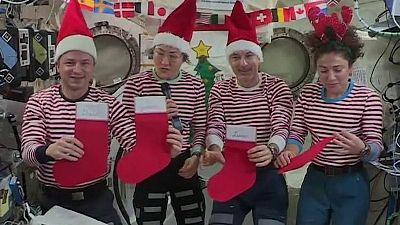 As the winter holiday season approaches, preparations for Christmas and other religious and festive celebrations are stepped up on planet Earth. But there are also celebrations being readied in space.

Every year since 2000 there have also been people up in space, in orbit around the Earth on the International Space Station.

Being 420 km above the Earth is no impediment to celebrating the holidays.

With 20 Christmases passed by humans in orbit so far, astronauts have found a host of ways to mark the occasion.

From video messages to loved ones back home, a well-earned day off, and even traditional Christmas dinner served in space-food form, here’s what happens during the festive season in space.

Who’s onboard this Christmas?

For two of them, it won’t be their first Christmas in space.

How have previous crews celebrated the holidays?

Last Christmas, five of the astronauts on board sent a Christmas message via video, spreading some festive cheer from orbit after a gruelling year on Earth marked by the coronavirus pandemic.

More of that festive cheer may be in order this Christmas too, with Earthlings once again dealing with the spread of COVID-19, amid worries over the new Omicron variant.

In that message, astronaut Kate Rubins announced the crew was taking part in a Christmas decoration contest with those working back on Earth in mission control.

"We have to make Christmas items to decorate the space station, it has to be obviously items that are up in space, and our challenge to mission control is you have to make a Christmas decoration from items in building 30," she said.

The challenge harked back to the first Christmas on a US space station, Skylab which was occupied between 1973 and 1974.

A first New Year is upon us
Eight strikes on the bell now as one
The globe spins below on its motion
Counting the last thousand years done.

No festive celebration would be complete without the appropriate food.

Space food is pretty different from what we get to enjoy back down on solid ground. There are a number of constraints associated with it, such as storage, lack of dedicated refrigeration, only very basic reheating equipment, and the requirement that food contains enough nutrients to justify its place on the ISS.

Holiday meals such as at Thanksgiving or Christmastime have become something of a tradition on the space station.

In 2016, French astronaut Thomas Pesquet showed off the food he was going to enjoy for Christmas, which included tinned chicken supreme with morels, and tinned gingerbread.

And in 2018 a Space-X dragon capsule played the role of Santa in delivering a hearty festive feast to the crew, which included smoked turkey, green bean casserole, candied yams, cranberry sauce, fruitcake, shortbread and butter cookies.

When is Christmas in space?

While for many of the NASA astronauts Christmas is observed on December 25, their Russian colleagues actually celebrate the holiday based on the Julian calendar, which is used by the Russian Orthodox Church.

Therefore they will celebrate Christmas on January 7.

The start of the new year is also marked on board. Those celebrations are when the clock hits midnight using GMT time.

Japanese billionaire returns to Earth after 12 days on space station

Anti-radiation bracelets turn out to be radioactive

No jab, no job: Google gets tough on employee COVID vaccine policy