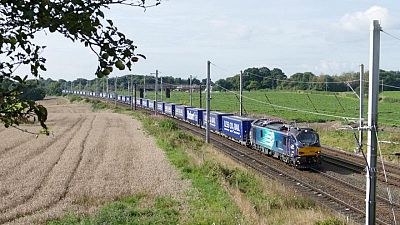 The new service from Tesco, which has a near 28% share of the country’s grocery market, removes road transport from the British leg of the journey for fresh produce from Europe.

With Christmas approaching, the new service will transport hundreds of different products, including sprouts, parsnips, carrots, onions, oranges and lemons to customers shopping over the festive season.

In the first domestic refrigerated rail service it has committed to, Tesco said it had partnered with Direct Rail Services (DRS) to distribute chilled goods from the Port of Tilbury, east of London, to Coatbridge in Scotland by low CO2 rail twice a day, seven days a week.

Tesco said the 415-mile service will take at least 17,000 containers off the road each year, saving 7.3 million road miles and nearly 9,000 tonnes of CO2 emissions.

“We’ve been using rail to transport our goods since 2008 and this new service reflects our continuing commitment to rail which has clear advantages for our business, our customers and the planet,” Jason Tarry, Tesco UK and Ireland CEO, said.

In September, Tesco extended its green targets by promising net zero carbon emissions by 2050 across its operations together with those generated by the products it sells and its supply chains.

It also pledged a new group-wide net zero target of 2035 for all its own operations, bringing it into line with the ambition set last year for its UK business alone.

British retailers are grappling with international supply chain delays that are being compounded by labour shortages in domestic transport and warehousing networks.

Tesco, however, has said it is coping well.