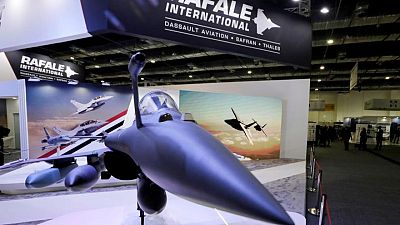 The deal, sealed on Friday, includes the largest ever overseas sale of the French warplane. It brings the number of new or second-hand Rafales sold for export to 236 and will trigger an increase in production for the warplane, the official told reporters.

The sale deepens existing security ties between France and the UAE at a time when diplomats say U.S. allies in the Middle East are increasingly questioning the commitment of the United States to the region following its exit from Afghanistan.

The French official said the contract demonstrated the appetite of several nations to “diversify their security”.

The deal is worth 14 billion euros for 80 of Dassault Aviation’s Rafale fighters, 2 billion for air-to-air and cruise missiles supplied by European consortium MBDA and 1 billion for 12 Airbus H225M Caracal helicopters, the official said.

The sale involves the latest F-4 standard of Rafale being developed for the French air force, which aims to increase connectivity and shared target identification between the jets, following the example of the U.S. Lockheed Martin F-35.

Defence sources have said the Rafale would replace a fleet of Dassault Mirage 2000 jets already deployed in the UAE and is unlikely to displace an order for the F-35 as the UAE continues to hedge its security between two major suppliers.

However, the deal is widely seen as a signal of impatience as the U.S. Congress hesitates on approving an F-35 deal amid concerns about the UAE‘s relationship with China, including the prevalence of Huawei 5G technology in the country.

The French official said the deal included no provision to buy back Mirage 2000s or carry out industrial offset investments.