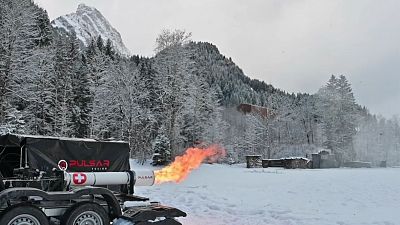 Plastic is a key environmental challenge as a source of pollution. According to the UN, approximately 76 per cent of all plastic produced between 1950 and 2017 has become waste.

But what if it could be recycled into rocket fuel?

UK-based start-up Pulsar Fusion is working on just that. Last weekend, CEO Richard Dinan and his team went to the Swiss ski resort of Gstaad to test a new “green” rocket engine.

HDPE is used in a wide variety of plastic products, such as beverage and detergent bottles.

Cleaner than the already existing fuels?

CEO Richard Dinan claimed this liquid fuel is cleaner than the fuels which power existing rockets, as the product of the two fuels is “mostly water and some CO2”.

“CO2 obviously isn't what we're trying to produce in the world,” he said.

“They have way too many cars producing that and in terms of rocket engines that makes it spectacularly clean. A lot of engines can be putting out really horrible, toxic fumes, things which we really don't want in the environment and really be some really nasty sort of products, whereas having a majority of water and CO2 makes it a very desirable engine. In fact, it's one of the cleanest designs around”.

The Americans are very happy to fund things for the technology with more conscientious investing, whereas people in England, they're more interested in quick, quick money and short term investment horizons and that's just not how you invest in space.

Dinan's team performed multiple tests on the rocket, especially to understand how it reacted to various factors needed to propel the engine in outer space, such as the pressure and the fuel composition.

“We wanted to see the engine running at full pressure, which we achieved with our first test in Switzerland,” he said.

“And to do that you have to have liquid fuel rather than the gas fuel, which is what we did, and then we wanted to supercharge the engine using nitrogen. And that also worked”.

Space industry: enough space for everyone

Having space ambitions means being reactive, especially in the race against the US, the British CEO said.

“America has its own space agency, and they now use a private company to put their arms around a lot of their launches because private companies are faster,” he said.

“Small companies like ours can build things at incredibly quick speeds and test them fast internationally”.

There’s a “different mindset when it comes to investing,” Dinan said.

“The Americans are very happy to fund things for the technology with more conscientious investing, whereas people in England seem to be sort of they're more interested in quick, quick money and short term investment horizons and that's just not how you invest in space”.

According to the news site SpaceWatch, the company recently received funding from the UK government to further develop its Hall Effect Thruster (HET) plasma satellite engines.

Pulsar’s ultimate goal is to produce a hyper-speed propulsion engine using nuclear fusion, which could halve the journey time from Earth to Mars.

The first prototype of the proposed engine is expected in 2025.