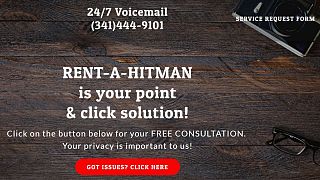 The Rent a Hitman website has received a number of genuine enquiries   -   Copyright  rentahitman.com
By Euronews  •  Updated: 26/11/2021

A woman in the US has been convicted for using rentahitman.com to try and have her former husband killed.

Billing itself as a "point and click solution" to a "problem that needs resolving," rentahitman.com is a joke website advertising the services of "over 17,985 US-Based Field Operatives".

Not realising it wasn’t a real point and click assassination service, Wendy Lynn Wein, 52, filled out the detailed enquiry form to try to organise the hit in the spring of 2020, according to Monroe News reports.

She used a fake name, but other information she entered identified her. Fields that are required to be filled include name, email address, address, age (adult or minor), relation to the target, target name, and address where the target can be found.

The owner of the website passed the information on to the police once it appeared that Wein was serious about her request.

Then an undercover detective arranged a meeting with Wein, which was under surveillance. At the meeting, police said she repeatedly told the detective she wanted her ex-husband murdered.

She gave his details and handed over a downpayment for the hit, after which she was arrested.

'Rent-A-Hitman' claims to be "100 per cent HIPPA compliant with the Hitman Information Privacy & Protection Act of 1964," a pun on the US’s Health Insurance Portability and Accountability Act (HIPAA).

I don’t get it. People are just stupid.

The tongue-in-cheek footer of the website states: "Due to contractual restrictions, Rent-A-Hitman is no longer affiliated with Diners Club, Kanye West, the Illuminati, Rudolph Giuliani, Alec Baldwin or Kyle Rittenhouse".

Wendy Lynn Wein, from South Rockwood, Michigan, was convicted of solicitation of murder and using a computer to commit a crime and faces at least nine years in prison. She will be sentenced in January.

The owner of rentahitman.com, Bob Innes, has helped the police to catch a number of other would-be customers who took the website too seriously, according to The Washington Post.

"I don’t get it," Innes told The Washington Post. "People are just stupid".