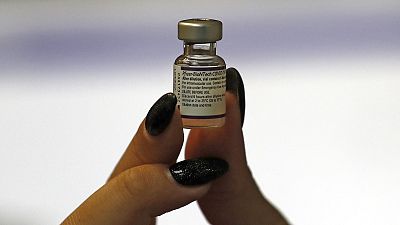 COVID vaccine boosters are already being administered in countries around the world.   -   Copyright  Ahmad Gharabli/AFP
By Julie Gaubert  •  Updated: 21/11/2021

Across Europe, the COVID-19 pandemic shows no signs of abating with several countries announcing further restrictions in recent days to contain a surge in new cases.

As well as a new lockdown, Austria announced this week that vaccination will be made compulsory from February 1, making it the first EU country to issue such a mandate.

But while vaccination programmes continue to progress, it is now becoming apparent that a third dose, or booster, will now be needed to keep COVID-19 cases numbers down.

On Monday, British prime minister Boris Johnson admitted that to be fully vaccinated no longer meant having two COVID jabs but rather three doses in order to prevent pandemic restrictions from being reinforced in the UK.

"Over time, the protection from two jabs starts to wane," he told a press conference.

"The third jab boosts protection back up to over 90 per cent against symptomatic infection," he added.

In the UK, the third dose has already been authorised for the over-50s and frail people since the beginning of September, with the goal of administering"10 million booster doses before Christmas," Johnson said.

Which countries are opting for COVID boosters?

Many European countries have launched their booster campaigns in recent weeks, but only 3.7 per cent of the continent's population has received a third injection, according to AFP.

Among the top performers when it comes to inoculations, Iceland is leading the way. Nearly 1 in 5 people have already received a booster dose in a population that is already 90 per cent vaccinated.

Faced with the resurgence of cases, the Icelandic government announced last Friday new health measures for its citizens, including the wearing of masks and the third dose for all those over 16.

Further to the east, Hungary and Serbia are in second place with 14 and 16 out of every 100 inhabitants respectively being triple vaccinated, according to data compiled by the OurWorldinData website.

The United States announced on Friday health authorities have given the green light for a third dose of COVID vaccine for all adults who were fully vaccinated at least six months ago.

Are the elderly more in need of a third dose?

In France, the over-65s have been called upon since September to receive a third jab or risk having their ‘passe sanitaire’, or COVID health pass, suspended in mid-December.

Caregivers and people suffering from co-morbidities, who are also eligible regardless of age, will not be deprived of their pass in the absence of a booster dose, French president Emmanuel Macron assured.

Third dose or no health pass?

Is making a third dose a condition for obtaining a health pass becoming widespread? In France, the Academy of Medicine rejected the idea.

The organisation said on October 29, that it was opposed to the possibility, which it said "goes beyond" the objective of the document.

It makes no sense to give boosters to healthy adults, or to vaccinate children, when health workers, older people and other high-risk groups around the world are still waiting for their first dose.

This measure "transgresses the role of the health pass, which was to limit the risk of transmission of the virus and to encourage the population to be vaccinated", the institution said in a statement.

In Israel, on the other hand, unless you received your second dose of the Covid-19 vaccine within the last six months, you will now need a third dose to become eligible for a green pass, which allows entry to gyms, restaurants, and other venues.

World Health Organization (WHO) Director-General Tedros Adhanom Ghebreyesus said it was "a scandal" that six times more booster shots are being administered around the world daily than primary doses in low-income countries, adding that "it must stop now".

"It makes no sense to give boosters to healthy adults, or to vaccinate children, when health workers, older people and other high-risk groups around the world are still waiting for their first dose," the WHO chief warned at a media briefing on November 12.

For Dr David Nabarro, the WHO's special envoy on COVID-19, relying only on a full vaccination strategy is a gamble for rich countries.

"It has never been done before and it would really be an inappropriate public health strategy to do so," he told the UK parliament’s All-Party Group on vaccines.

The main threat in creating new variants is the reliance on existing vaccines, Nabarro warned.

What needs to be done is a "combination approach" of masks and other health interventions, "which is to do everything possible to empower people to avoid being infected by the pathogen," he said.

COVID vaccines saved nearly half a million lives in Europe