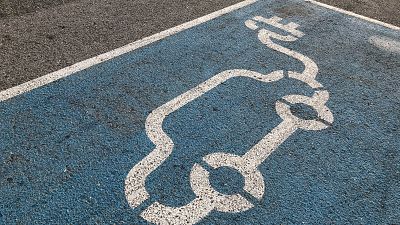 The world's biggest car manufacturers have failed to sign a pledge committing to make all new vehicles zero emissions by 2040.

Toyota, Volkswagen, Stellantis and Hyundai do not appear on the list of signatories to the Glasgow Declaration on Zero Emission Cars and Vans, unveiled on Wednesday at the COP26 climate talks in the Scottish city.

The declaration was backed by over 100 signatories, including carmakers Volvo, Ford, Mercedes-Benz and Jaguar Land Rover, as well as 33 national governments, regional authorities and companies including rideshare service Uber.

Major manufacturing economies Germany, China, Japan and the United States did not sign the pledge, which commits to zero emission vehicle sales in "leading markets" by 2035.

The non-binding pledge, signed by nations including COP26 host the United Kingdom, commits its signatories to making electric vehicles (EVs) the "new normal" and to "supporting a global, equitable and just transition so that no country or community is left behind".

But environmental groups responding to the announcement warned that stronger action would be needed to cut transport emissions and keep global warming under 1.5C.

"The car industry’s electrification plans place it ahead of regulators on climate action. But these won’t materialise without actual targets to end car emissions by 2035 at the latest," said Julia Poliscanova from green think tank Transport & Environment.

"The US and Europe, especially Germany and France, need to lead," she added.

"What’s gravely concerning today is that major economies like the US, Germany, China, Japan and manufacturers like VW, Toyota and Hyundai could not even bring themselves to sign a declaration on electric vehicles that promises less than what’s actually required to maintain climate security," said Greenpeace Germany's executive director Martin Kaiser.

Many manufacturers have already made their own commitments to end production of internal combustion engine vehicles.

Earlier this year, Stellantis announced that its Opel brand would go 100 per cent electric in Europe by 2028 and that Italian marque Alfa Romeo would make the jump to EVs by 2027.

VW has also announced plans to sell only battery electric models in Europe by 2035.

These commitments do not take into account China or the US, the world's largest and second-largest car markets, however.

Swedish carmaker Volvo, which signed up to Wednesday's declaration in Glasgow, said it hoped both the industry and governments would speed up the transition away from fossil fuels.

"Our plan to be a pure electric car maker by 2030 is one of the most ambitious in the industry, but we can’t realise zero-emission transport by ourselves," said Volvo CEO Håkan Samuelsson.

The jury will be out on COP26 for some time | View