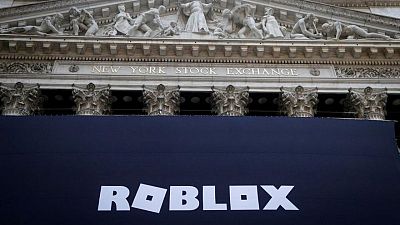 -Roblox Corp exceeded market estimates for quarterly bookings on Monday as demand for its video games “MeepCity” and “Adopt Me!” stayed strong even after pandemic-led curbs eased, boosting its shares nearly 33% in extended trading.

People had turned to video games for entertainment during last year’s months-long isolation, sparking a boom that is yet to slow down despite schools reopening and COVID-19 restrictions easing.

Roblox, among the world’s most popular gaming sites for children, said daily active users grew 31% to 47.3 million during the third quarter and gamers spent 11.2 billion hours on the platform.

“Based on our October results, we appear to be having a great start to the last quarter of the year,” Chief Financial Officer Michael Guthrie said.

Bookings surged 28% to $637.8 million, while analysts had expected $636.5 million, according to IBES data from Refinitiv.

CFRA Research analyst John Freeman said Roblox’s growth is driven by its video games, its social media element and the way it has developed a platform for building video game experiences.

San Mateo, California-based Roblox has capitalized on the gaming boom by allowing users to create an in-game metaverse, a shared virtual world where their avatars can interact with others. It has also attracted users by hosting virtual concerts of artists like Twenty One Pilots and rapper Lil Nas X.

“This company is not just going to be a revenue machine, its going to be an earnings machine,” Freeman added.