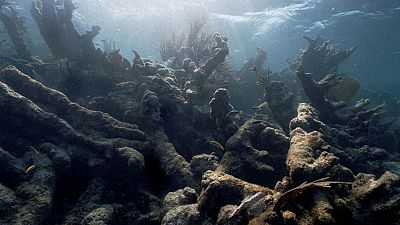 LONDON – Belize provided a likely ‘blue’ model for conserving some of the world’s most vulnerable marine ecosystems on Friday, swapping a promise to protect the northern Hemisphere’s biggest barrier reef for much-needed debt relief.

While urgent efforts to limit global warming are expected to see at least half a trillion dollars of ‘green’ bonds this year, ‘blue’ bonds are still in their infancy, despite estimates that oceans contribute around $3 trillion per year to global GDP.

Financial incentives have been one of the main pillars of efforts at the United Nations COP26 climate change summit to tackle rising temperatures, with demands from poorer countries for increased help from richer states.

The pioneering step involves the central American country committing to spend $4 million a year and fund a $23 million marine conservation trust to protect the world’s second-largest coral reef, damaged in the past by oil drilling and overdevelopment.

It must also increase Biodiversity Protection Zones from the current 15.9% of ocean area to 30% by 2026 as well as meet a list of other promises that if it reneges on will trigger penalties.

“This deal is huge for Belize, especially during a tremendously difficult time for our economy,” Belize’s Prime Minister John Briceño said on Friday.

“But its impact extends far beyond us,” he added.

So-called debt-for-nature swaps are rare, with a smaller one by The Seychelles in 2015 the only other ‘blue’ example to date.

Belize’s swap is large enough though that is can pave the way for many sovereign restructurings, which have often seen countries pushed to exploit environmentally-damaging resources such as oil, to also include eco-friendly elements.

“This can totally be replicated for other countries with external debt trading at a discount” said Kevin Bender, Senior Director of Sustainable Debt at TNC.

The group aims to use such transactions to ensure the new protection of up to 1.5 million square miles (4 million sq km) of the world’s most biodiversity-critical ocean habitats from Latin America to Asia, which would represent a 15% increase in the current area of protected ocean.

There are some voices of caution

Veteran emerging market GMO fund manager Carl Ross who was involved in Belize’s restructuring says there are not many countries that boast the kind of natural assets Belize has, so investors might not be so keen to replicate it.

Campaign group the European Network on Debt and Development warns the swap is also unlikely to solve Belize’s problems longer-term as achieving a 3% primary fiscal surplus over three years – equal to 9.6% of GDP – will be very tough.

TNC‘s Bender and its Belize programme head Julie Robinson said such deals require a country keen to protect its ocean that is also in enough financial distress that its debt can be bought at a deep discount.

In Belize’s case that discount was 45%, while protecting the reef was economically as well as environmentally clear cut.

The country’s 125-metre (410-foot) deep Blue Hole is ranked as one the world’s best diving sites. Combined with rainforests and other natural attractions, it means tourism accounts for some 40% of Belize’s economy, nearly 40% of employment by some measures and 60% of foreign exchange earnings.

“The government at the time jumped on the opportunity,” Robinson said, explaining how the idea started 18 months ago under the former government when COVID was crippling tourism and pushing Belize’s debt-to-GDP ratio over 125%.

“We worked with both governments which was very fortuitous,” Robinson said. “Both sides (current and former government) are taking credit now. And so they should.”

The financial mechanics involved TNC setting up a special finance vehicle which used funding from Credit Suisse. It then lent this to Belize to buy back and retire the superbond.

This provides around $200 million of debt relief to the central American country because that loan is partially guaranteed by the U.S. DFC, which has a top credit rating meaning it can borrow from banks or markets at ultra-low rates.

Yerlan Syzdykov, Global Head of Emerging Markets at Europe’s biggest fund manager Amundi, thinks Zambia and Lebanon could include such eco measures in their restructurings and a country like Argentina could do so in the future too.

ABRDN, a former Belize bondholder involved in the negotiations, is also optimistic it can be replicated.

“We think the Belize example can serve as a template for future pro-green sovereign debt restructurings,” it said.

And TNC‘s Bender is optimistic that another ‘blue’ swap will be done within a year.

“We just need all the forces aligned,” he said.