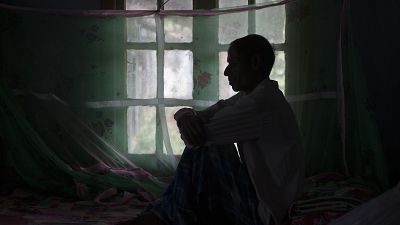 Deaths from tuberculosis (TB) have risen again for the first time in more than a decade as the COVID-19 pandemic disrupts access to health services, the World Health Organization (WHO) said on Thursday.

"This is alarming news and should serve as a global wake-up call about the urgent need to invest and innovate to close the gaps in diagnosis, treatment and care for the millions of people affected by this ancient but preventable and treatable disease," WHO Director-General Dr Tedros Adhanom Ghebreyesus said in a statement.

In the 2021 Global TB report, the WHO estimated that about 4.1 million people have TB but are undiagnosed or not officially declared to health authorities, a sharp increase from 2.9 million in 2019.

"The number will continue to rise unless urgent action is taken," the health watchdog tweeted.

According to the report, many countries have redirected their resources from tackling TB to the COVID-19 response, limiting access to essential services.

This suggests that people struggled to seek care during coronavirus pandemic lockdowns.

The rising death toll jeopardises the WHO's strategy to reduce TB deaths by 90 per cent and the incidence rate by 80 per cent by 2030, compared to 2015, according to AFP.

The number of people newly diagnosed with tuberculosis and declared by the authorities fell to 5.8 million in 2020, compared to 7.1 million in 2019, which represents an 18 per cent drop from the 2012 level.

The countries that saw the biggest reduction in TB cases between 2019 and 2020 were India, Indonesia, the Philippines, and China.

"We have just one year left to reach the historic 2022 TB targets committed by Heads of State at the first UN High Level Meeting on TB," said Dr Tereza Kasaeva, director of WHO’s Global TB Programme.

"The report provides important information and a strong reminder to countries to urgently fast-track their TB responses and save lives. This will be crucial as preparations begin for the 2nd UN High Level Meeting on TB mandated for 2023".

Tuberculosis is a communicable disease that is a major cause of ill health and one of the leading causes of death worldwide, the report said.

Until COVID-19, TB was “the leading cause of death from a single infectious agent, ranking above HIV/AIDS.”

It is caused by the bacillus mycobacterium tuberculosis, which is spread when people expel bacteria into the air (e.g. by coughing). The disease typically affects the lungs (pulmonary TB) but can affect other sites.

Most people (about 90 per cent) who develop the disease are adults, with more cases among men than women.

Yet, this disease does have a cure: about 85 per cent of people who develop TB disease can be successfully treated with a six-month drug treatment, the report said.

The number of people acquiring infection and developing the disease (and thus the number of deaths caused by TB) can also be reduced through “multisectoral action to address TB determinants” such as poverty, undernutrition, HIV infection, smoking, and diabetes.

But actions to mitigate and reverse the surge of TB have a cost. Global spending on diagnosis, treatment, and prevention services also declined from €5 billion to €4.5 billion.