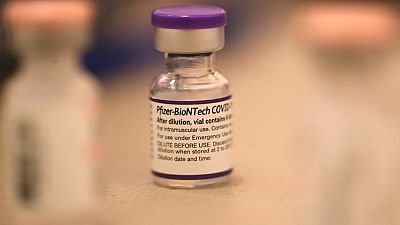 The European Medicines Agency (EMA) on Monday advised people with "severely weakened immune systems" to get a third dose of the Pfizer-BioNTech or Moderna COVID-19 vaccines.

The European Union's drugs regulator said in a statement that people 18 and older should be given a booster at least 28 days after their second dose.

The recommendations were issued after data showed a rise in antibody levels following the administration of Pfizer-BioNTech booster shots 6 months after the second vaccine dose in people from 18 to 55 years old.

"Although there is no direct evidence that the ability to produce antibodies in these patients protected against COVID-19, it is expected that the extra dose would increase protection at least in some patients," the agency declared.

The European Commission and the health authorities in all 27 EU nations will have to approve the recommendations.

It remains the responsibility of member states to decide if the wider population should have a booster, but some countries have already started giving the third dose.

Several studies have shown that the Pfizer-BioNTech and Moderna vaccines remain strongly protective months after people receive their second dose, dramatically cutting the risk of hospitalisation and death.

But not all experts have agreed on the strategy. The World Health Organisation (WHO) has urged wealthy nations not to use booster doses this year, arguing that COVID-19 vaccines would be put to better use in developing countries, where many people still have not received their first vaccine shots.

It also says there is no scientific data that proves booster shots are necessary.

"The company does not expect the introduction of booster doses in the United States and the EU, if authorised, to impact the existing supply agreements in place with governments and international health organisations around the world," Pfizer-BioNTech said in a statement.