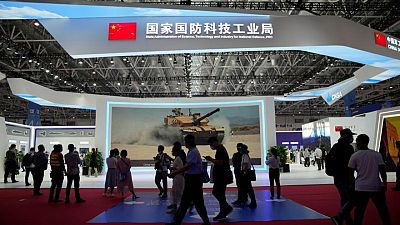 ZHUHAI, China -China touted its expanding military air power and hopes of capturing a growing share of its civil aviation market for domestic producers at a national air show inaugurated amid regional tensions over Taiwan and disruption from the pandemic.

Typically held every other year in the southern resort of Zhuhai, Airshow China opened on Tuesday after a year of delays caused by COVID-19, with a scaled-back foreign presence and a sharp focus on China’s domestic and regional priorities.

Flying demonstrations on a hot and hazy day that had crowds scrambling for shade included a smoke-trailing display by J-10 fighters from the Bayi aerobatic team.

China’s newer J-20 stealth fighter, which made its debut at Zhuhai in 2016, roared above dignitaries with domestic rather than Russian-made engines for the first time, state media said.

On the ground, China showcased a prototype of the CH-6 long-endurance drone, capable of reconnaissance and strike operations, and the WZ-7 high-altitude surveillance drone.

Also capturing attention for the first time was the J-16D, an electronic attack version of China’s J-16 fighter.

“The scope and scale of high-end warfighting capability on display is definitely a step-up from previous shows,” said Kelvin Wong, a Singapore-based defence editor at Janes.

Analysts said its show debut appeared to signal a push to counter Western and Taiwanese defences.

“The J-16D is a special threat to Taiwan since it can attack anti-aircraft defences that Taiwan must rely on heavily in any Chinese attempt to forcibly take control of the island,” said Bradley Perrett, a specialist on Asian aerospace and defence.

China claims Taiwan as its own territory and has stepped up military and political pressure to try and force the democratically ruled island to accept Chinese sovereignty.

Speaking at an opening ceremony in Zhuhai, Chang Dingqiu, commander of China’s air force, said its officers would “resolutely defend the reunification of the motherland”.

Taiwan this month proposed extra defence spending of almost $9 billion over the next five years, including on new missiles, in the face of what it called a “severe threat”.

Commercial planemakers, meanwhile, see strong post-pandemic prospects for the Chinese aviation market, with an increasing share of the spoils expected to go to domestic manufacturers.

China is a key hunting ground for foreign aviation firms, thanks to the quick recovery in domestic travel, but the outlook is complicated by Beijing’s desire to grow its own champions.

The country’s aviation regulator may be a stumbling block for foreign planemakers looking to boost sales in the world’s biggest market for new planes.

As Commercial Aircraft Corp of China (COMAC) ramps up production of the 90-seat ARJ21 regional jet, the regulator has not certified slightly larger offerings from Airbus and Brazil’s Embraer.

Airbus China CEO George Xu said it was in talks with China about certification, a crucial step to winning new orders.

China, however, has policies that favour its homegrown planes, such as offering them favourable airport slots, the Civil Aviation Administration of China said last year.

Boeing is meanwhile waiting for approval of its 737 MAX after an almost two-year safety grounding. The ban, which has already been lifted in the West, could be eased around November after a successful test flight, people close to the matter said.

COMAC on Tuesday forecast 20-year Chinese demand for 953 regional jets with 90 seats. Deputy marketing manager Yang Yang said there was enough room in the market for all players.

“The aviation market is as vast as the Pacific Ocean, where we have our own competitive territories,” he told reporters.

COMAC expects local certification this year of its larger 160-seat C919, a rival to the Airbus A320 and Boeing 737 families, though it will take time to ramp up production.