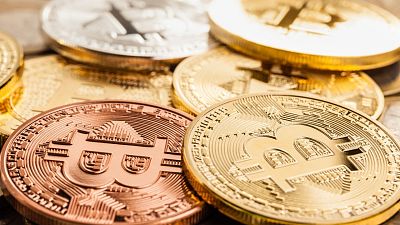 The cryptocurrency price plunge is not only affecting Bitcoin.   -   Copyright  Getty via Canva
By Pascale Davies  & Reuters  •  Updated: 21/09/2021

Cryptocurrencies were licking their wounds on Tuesday after prices plunged a day earlier with roughly half a trillion dollars was wiped from the crypto market. It comes amid concerns over the spillover risk to the global economy from Chinese property group Evergrande's troubles.

But Bitcoin was not the only crypto to suffer.

Smaller rival Ether, the coin linked to the Ethereum blockchain network which is the second-biggest cryptocurrency by market cap fell more than 10 per cent on Monday.

Meanwhile, Cardano, Solana and Polkadot shed between 7 per cent and 12 per cent on Monday. And the meme-based Dogecoin has slipped from seventh to 10th place on the CoinMarketCap ranking.

Why are cryptos plunging?

Global markets started the week on a turbulent note after fears that Evergrande's troubles could lead to fallout for the Chinese and global economies prompted a selloff in riskier assets.

The Chinese property group Evergrande is facing a debt of $300 billion (€255.7 billion) and possible collapse. On Monday the company's Hong Kong-listed shares slid around 20 per cent. There is concern a collapse could disrupt many markets, including cryptos.

"I think it's general investor behaviour when you see investors getting more risky with what they're investing in and where they might not have the highest level of conviction," said Frank Downing, research analyst at cryptocurrency and blockchain based development platform ARK.

"I think more short term plays or leveraged plays, as soon as they start to see, even if it's an unrelated market, something that is a risk of in nature, it gives them cause for concerns," he told Euronews Next.

"They're going to consolidate their investments to what they have the most conviction is. And if there have been people that have been moving into cryptos more recently that don't have that strong conviction, they'll also be the first ones to move out."

However, Downing said the recent market turmoil does not come as a big shock.

"I think the high volatility of the asset class is something that we can kind of come to expect over the past few years. I also think in situations like the Evergrande, that results in an equity drawdown in the US, it commonly spills over into cryptos as well," he said.

But Evergrande is not the only reason for the cryptos losing their value.

Cryptocurrencies are also possibly facing a clampdown by US lawmakers and watchdogs, according to reports.

Last week, the Wall Street Journal reported the Biden administration is "preparing an array of actions, including sanctions, to make it harder for hackers to use digital currency to profit from ransomware attacks".

Downing said the regulatory environment in the US is also affecting the crypto markets.

If there have been people that have been moving into cryptos more recently that don't have that strong conviction, they'll also be the first ones to move out.

The top US regulator, the Securities and Exchange Commission (SEC), and primarily its chairman Gary Gensler, have made several comments recently about the SEC's role in potentially regulating crypto, particularly taking aim at some of the new lending products, staking and stable coins that have attracted a lot of interest from investors.

Things came to a head over Coinbase, the US's largest cryptocurrency exchange. The SEC took a tough stance on Coinbase and threatened to sue it if it launched a lending product.

On Monday, Coinbase bowed to pressure and scrapped its plans for the lending product.

But there have been other global crypto concerns.

In June, China and Iran temporarily banned Bitcoin mining due to it causing power shortages.

Then in August, the price surged in anticipation of El Salvador using the cryptocurrency as legal tender. But the roll-out in the central American country was met by technical issues, which caused large selloffs.

.Will cryptos bounce back?

"I think they'll be a bit of one realisation when you see a sell-off that's triggered by a completely unrelated event like Evergrande of money flowing back in," said Downing.

He said once the concerns over Evergrande are over, investors will want to know the specifics of government regulation.

"Be it a larger or smaller crackdown of sorts, that will reduce some of the ambiguity and give investors more confidence," he said, adding he believes the SEC and Gary Gensler are not anti-innovation and they want to see generally focussed on investor protection.

"As some clarity comes out, I think more investors will be willing to move into the space, even if it is saying that certain products aren't allowed or require a heightened level of regulation in their filings.

"Just removing that ambiguity will be a positive thing," he said.

Ukraine has just passed a new cryptocurrency law. What will change?

Venezuela’s cheap electricity is a blessing for its Bitcoin miners