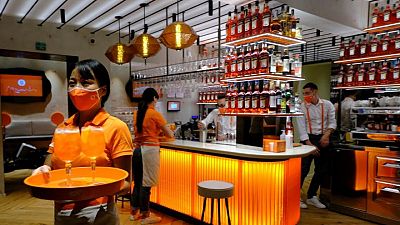 VENICE – Italian drinks group Campari sees plenty of room for growth from its best-selling beverage Aperol and is not worried about the threat from competitors, including a new spritz cocktail launched by LVMH‘s Moet Hennessy.

In an interview with Reuters at the opening of the first flagship bar for Aperol in Venice, Campari Chief Executive Bob Kunze-Concewitz said the group is confident the bright orange aperitif could continue to grow by double digits over the years and attract new customers among beer drinkers.

Kunze-Concewitz also said the group’s strategy is still to expand through acquisitions and that in the medium to long term the group aims to secure big deals.

Campari bought Aperol in 2003 when the aperitif was drunk only in the Veneto region of Italy and its sales were less than 50 million euros ($59 million) a year.

In 18 years Campari has developed a global brand by marketing Aperol as the main ingredient for the spritz cocktail. The beverage currently accounts for around one-fifth of Campari’s nearly 2 billion annual sales and is considered by financial analysts as the group’s engine of growth, with other brands including Campari bitter and Grand Marnier liqueur recording a more volatile trend of growth.

“There is a huge opportunity still ahead of us on Aperol growth,” said Kunze-Concewitz, adding that comparing data on per-capita consumption of beer and Aperol shows that the drink can win many more consumers around the world and even in Italy.

Between 2004 and 2019 Aperol’s sales grew 16.5% on average every year. A pause in growth in 2020 due to the pandemic created some doubts the drink had reached a plateau.

However, Campari results in the first half of this year have marked a return to double-digit growth also versus 2019.

“We have developed a long-term marketing model which ensures that we constantly have double-digit growth rates for Aperol,” the CEO said, adding that in Italy the group is now introducing Aperol as a beverage to go with meals rather than just an aperitif.

After the opening in Venice, other cities outside Italy will host a Terrazza Aperol in the future as a way to make the brand even more visible, the CEO said.

“I am not worried (about imitations). As long as the new entrants are premium and come from high-end groups they will broaden the overall aperitif category,” Kunze-Concewitz said, adding that “imitation is the greatest form of flattery”.

“It is not only a question of trying to get some sort of orange liquid into a bottle. It is about quality. No one can really compete with us on taste”.

Moet Hennessy launched the new drink in France in May and plans to sell it in Italy next year.

Despite competing on aperitifs, Campari and Moet clinched an alliance to develop an e-commerce platform for wine and spirits in July around Italy’s Tannico and they will support it through acquisitions in Europe, the Campari CEO said.

The Italian group, which has proven successful in buying and reviving heritage brands, continues to scout for acquisitions even if multiples and prices of potential targets remain high.

Campari’s CEO said the pandemic did not change the M&A landscape in the spirits sector, adding that low interest rates mean abundant liquidity and high multiples.

The group, however, is confident of finding good deals.

“Returning cash to investors is possible in theory, but we have plenty of ideas, we think we can do interesting acquisitions in the medium to long term horizon,” the CEO said.

Kunze-Concewitz expects a consolidation in the spirits sector and says the group is getting ready for big deals after it moved its registered office to the Netherlands last year to introduce an enhanced loyalty share scheme.

“We have gained much more flexibility in our financial structure, this will allow us, if an opportunity arises, to issue equity to finance bigger deals while still allowing the current majority shareholder to keep control,” he said.

Campari is majority-owned by the Luxembourg-based holding company of Italy’s Garavoglia family. Kunze-Concewitz said the Garavoglia family had turned down offers to sell the group, noting that Campari has offered a high return to investors so far.