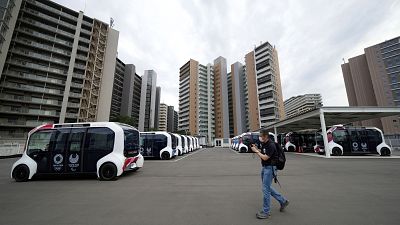 The e-palette autonomous pods were used to transpirt athletes and staff during the games prior to suspension of service   -   Copyright  Eugene Hoshiko/AP Photo
By Tom Bateman  & Reuters  •  Updated: 31/08/2021

Japanese carmaker Toyota announced it will restart the use of its self-driving buses at the Tokyo 2020 Paralympic Games village on Tuesday after one of the vehicles hit a visually-impaired athlete last week.

Japanese judoka Aramitsu Kitazono was knocked down by the "e-Palette" autonomous transportation pod as he walked to a dining hall at the athletes' village in Tokyo last Thursday. The vehicle was under human control at the time of the accident, Toyota's CEO said.

In a statement released on Monday, the company said the Games' Organising Committee had decided to restart operations after making changes to "ensure the safety of the diverse range of people who make up the Paralympic community".

The safety changes put in place by Toyota will take away many of the self-driving elements of the e-Palette, handing full control of the autonomous pod's acceleration, deceleration and stopping over to a human driver. The vehicle's warning alerts have also been made louder, the company said.

Toyota's statement also included the company's assessment of the accident, which athlete Kitazono was able to walk away from.

According to Toyota, the autonomous vehicle was about to turn right at a T-junction in the Tokyo Olympic village when it detected a person at the roadside and stopped.

The vehicle's human operator then began to move the e-Palette again. At this point, Toyota said, Kitazono - who has reduced vision as a result of a genetic condition - stepped out into the road and was hit by the vehicle.

The accident occurred despite the fact that two guides were on duty at the pedestrian crossing, Toyota said.

According to the statement, Olympic Village staff will also receive road safety training before the autonomous vehicles resume operations at 3 pm local time on Thursday.

Self-driving 'not yet realistic'

Following the accident last week, Toyota Chief Executive Akio Toyoda apologised for the incident on YouTube, saying “a vehicle is stronger than a person, so I was obviously worried about how they were".

Toyoda said the accident showed the difficulty for the self-driving vehicle to operate in the special circumstances of the village during the Paralympics with people there who are visually impaired or have other disabilities.

“It shows that autonomous vehicles are not yet realistic for normal roads,” he said.

The e-Palette, a fully autonomous battery-electric vehicle, was adapted specifically for use during the Tokyo Olympic and Paralympic Games, with large doors and electric ramps to allow groups of athletes to board quickly.

Toyota has said it is cooperating with a local police probe to determine the cause of the accident, adding that it would also conduct its own investigation.