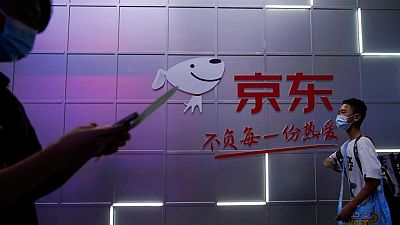 By Josh Horwitz and Akanksha Rana

SHANGHAI -Chinese e-commerce giant JD.com Inc on Monday told investors it does not expect any business impact from a wave of regulations hitting Chinese industry, after beating analysts’ expectations for the quarter through June.

The company’s Hong Kong-listed shares jumped nearly 10% in morning trade on Tuesday, setting it up to add nearly $10 billion to its market value. The broader Hang Seng Index was up 1.7%.

The company’s strong results come amid a crackdown on the tech industry by Chinese authorities that has led to an upheaval in sectors such as e-commerce, ride-hailing and cryptocurrency.

Since last year, regulators have announced new policies aimed at improving privacy, data-security, and market competition and penalized companies who have violated rules.

“Undoubtedly, we believe that the introduction of regulatory policies on the internet industry recently is a good thing for the long term and healthy development of industries,” said Xu Lei, chief executive of JD Retail, the company’s main e-commerce division, on an earnings call.

Xu added that the company had completed a self review and rectification exercise and foresaw no major business impact due to the regulations.

Despite the ongoing regulatory tightening, the company added a record 32 million users over the quarter and delivered growth in its logistics and marketplace divisions.

“The key surprise … came from its strong user growth,” said Daiwa Capital Markets analyst John Choi. “Despite a likely weaker e-commerce industry growth in 2H21, we are turning incrementally positive on JD compared with its peers due to its prudent strategy in terms of operations and spending amid the current regulatory environment and its growing scale in (fast-moving consumer goods) and online grocery.”

As part of China’s regulatory crackdown on tech and digital giants, it fined most notably JD.com’s rival Alibaba a record of about $2.5 billion in April for anti-competitive behavior. Alibaba later missed its revenue estimates for that quarter.

In April, the China Shanghai stock exchange terminated a planned IPO for JD Digits, JD’s fintech division, citing a request from the company to withdraw it. The pullback came after authorities abruptly blocked the listing of Alibaba’s financial affiliate Ant Group

On the JD’s earnings call, executives said that the company added new merchants to its platform following authorities’ banning of a practice known as “two-choose-one,” wherein e-commerce sites ban merchants who list on rival platforms.

They added that the company is in compliance with an upcoming data security law, and highlighted how drivers in its logistics division are employed full-time and receive social and commercial insurance.

When asked about reported changes to preferential tax policies for tech companies, executives said the company has received no notice that such policies will be retracted, and added it expects no impact should a retraction occur as none of its subsidiaries has applied to become a key software enterprise.

Excluding items, the company posted a profit of 2.90 yuan per American depositary share (ADS), compared with analysts’ expectations of 2.35 yuan.

Net revenue at JD.com rose about 26% to 253.8 billion yuan ($39.14 billion) in the second quarter ended June 30. Analysts had expected revenue of 249.27 billion yuan, according to IBES data from Refinitiv.