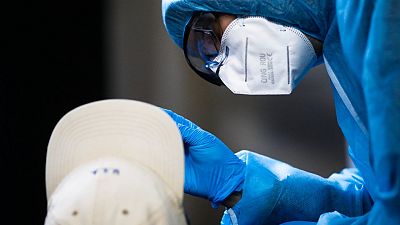 If you have undergone nasopharyngeal swabs for coronavirus testing, it’s unlikely you’ll remember it as a pleasant experience.

But researchers are now teaming up to create a cheaper, quicker, and more comfortable alternative to PCR tests - particularly for use in testing children - which would detect the disease on a person’s breath.

It’s hoped these COVID “breathalyzer” tests could bring disease detection one step forward and lead to screening large numbers in places like airports, events, and even schools.

Sensor arrays have also been developed to detect some traces of COVID-19 in the exhaled breath of adults.

However, the new study published by the American Chemical Society Infectious Disease shows that children infected with COVID-19 exhale unique biomarkers that are largely different from adults’ ones.

The study was conducted with breath samples collected from patients at the Children’s Hospital of Pennsylvania (CHOP), 15 of whom had tested negative to the virus while 10 tested positive.

In analysing 84 volatile organic compounds in those breath samples, researchers flagged six that were "significantly elevated with COVID-19".

Although two of the markers were already known in adults’ biomarkers, the other four were "unique to children".

When researchers scanned a second group of children (of whom 12 had a positive PCR test and a further 12 a negative one), they replicated the same biomarkers.

"Our study shows that breath biomarkers could be a useful tool in screening for the SARS-CoV-2 virus,” Dr Audrey R. Odom John, Chief of the Division of Pediatric Infectious Diseases at Children’s Hospital of Philadelphia and senior author of the study, said.

"Given the cost, discomfort, and false-negative results associated with current testing methods, a breathalyzer test may provide an inexpensive, noninvasive, rapid, and highly sensitive alternative for screening of large numbers of people, like at airports, large indoor events, or even school settings".

Will future testing be as easy as breathing?

Interest in the technology is fierce in the medical field with scientists scrambling to develop a device that can quickly and painlessly diagnose a disease with just one puff of air.

But different diseases can alter someone’s way of breathing as can lifestyle choices such as diet, alcohol consumption, or whether they smoke or not.

Dutch company Breathomix has taken up the challenge. Founded in 2018, it brought to the SpiroNose, a device that captures breath profiles in real-time and sends data to the Cloud, to market though it is not without its detractors.

In one study of the SpiroNose, which included 4,510 participants, a team of Dutch researchers reported that “the device correctly identified at least 98 per cent of people who were infected with the virus, even in a group of asymptomatic participants”.

"But the SpiroNose had a relatively high rate of false positives," New York Times reported.

"Because of this problem, the device does not provide consumers with a definitive diagnosis".